And they said it couldn’t happen!

Today, Paul Reubens (born Paul Rubenfeld on Aug. 27, 1952) celebrates (in the coolest style, to be sure) his seventieth birthday. What’s he got to do with comics? Well, he obviously reads them, and his alter-ego, Pee-wee Herman, once met legendary small-scale comics hero Bazooka Joe.

This momentous occasion took place on the back of card no. 18 (of 33) from Topps’ delirious Pee-wee’s Playhouse set (1988). Introductions were arranged by that dapper bon vivant, Mark Newgarden.

At one time, during Pee-wee’s heyday, I dated for a few months this girl from a, to put it mildly, conservative family. Her little brother was expressly forbidden from watching Pee-wee’s Playhouse, for fear that ‘it might turn him gay’. Live and learn… do check out this smart list of The Best 25 Pee-wee’s Playhouse Moments.

Happy birthday Paul, and a great weekend to you, Pee-wee!

*a grateful tip of the hat to Mark Newgarden for the inside dope!

The brain-with-tentacles is curled up at the comfy intersection of two beloved tropes, the Brain Monster and the Tentacled Terror. Through some clever combining, one is guaranteed a truly horrendous creature that’s at least 25% more appalling than either of its step-parents. It’s the favourite of many a filmmaker and comic artist, and the toast of this particular post!

It may be a little too early to wrap yourself around a drink (at least in this part of the world), so you’ll have to enjoy this Tentacle Tuesday sober.

One has to pay one’s dues to the classics: Basil Wolverton‘s The Brain Bats of Venus, originally published in Mister Mystery no. 7 (September 1952), is unquestionably indispensable, so I could hardly turn a blind eye to it. In case you were out that night and missed it, you can read the whole story at The Horrors of It All blog.

The tentacled brain has several means of locomotion at its disposal, and while crawling around spasmodically is a great mood-setter, floating around gives one much better scope of movement. The following is one of those floaters, aided by some mechanical gizmos.

Superboy & the Legion of Super Heroes no. 241 (July 1978). Cover pencilled by James Sherman and inked by Joe Rubinstein.

The cover story, Prologue to Earthwar is scripted by Paul Levitz, pencilled by James Sherman and inked by Bob McLeod:

As implicitly suggested earlier by that panel from Brain Bats of Venus, some brain-monsters latch onto their victims’ brains, either sucking them out like you’d do with a coconut and a straw, or taking over people’s minds by puncturing some unsavoury holes I’d rather not think about too closely. A character in the following issue of World Below, when it is kindly suggested to her that perhaps it would be a sound idea to sever her ties with the tentacled thing on her head, mentions that « it hurts them to release — terribly. And it’s hard to reconnect, too. Like surgery without anaesthesia.» The implications are… unpleasant.

Zombies! is scripted and pencilled by Paul Chadwick and inked by Ron Randall, with grey tone separations by Jason Hvam:

Moving along to goofier pastures…

This is perhaps getting ever-so-slightly beyond the parameters of today’s brain theme, but the inside of this issue hides a gem in its otherwise dull pages (although I have to be fair: the stuff is much better than I expected). Behold: Spongebob in Monster Canyon, written by Kaz and drawn by Tony Millionaire, both favourites of this blog. With such excellent parentage, one expects something wonderful, and one is not disappointed.

Keep a close eye on your brains, folks, lest they be transformed into mindless mush by brainy aliens with tentacles with a taste for grey matter. I’d also stay away from TV, just in case…

« Are you mentally undressing me? » « Actually, I’m mentally shaving you. »

Been sniffing ’round the bushes for a depraved hybrid of Popeye, Snuffy Smith, Nancy, Bazooka Joe on one hand, and, say… Ambrose Bierce, Oscar Brand and Charles Rodrigues on the other, with a sprig of Rod McKuen for nuance? Perk up, Sparky, your quest is about to reach its happy end.

Underworld is the rabid brainchild of American cartoon god (né Kazimieras Gediminas Prapuolenis in 1959) alias (for some reason) Kaz. Underworld has been appearing in various alternative weeklies since 1992. But none in my neck of the woods, naturally. Grr. 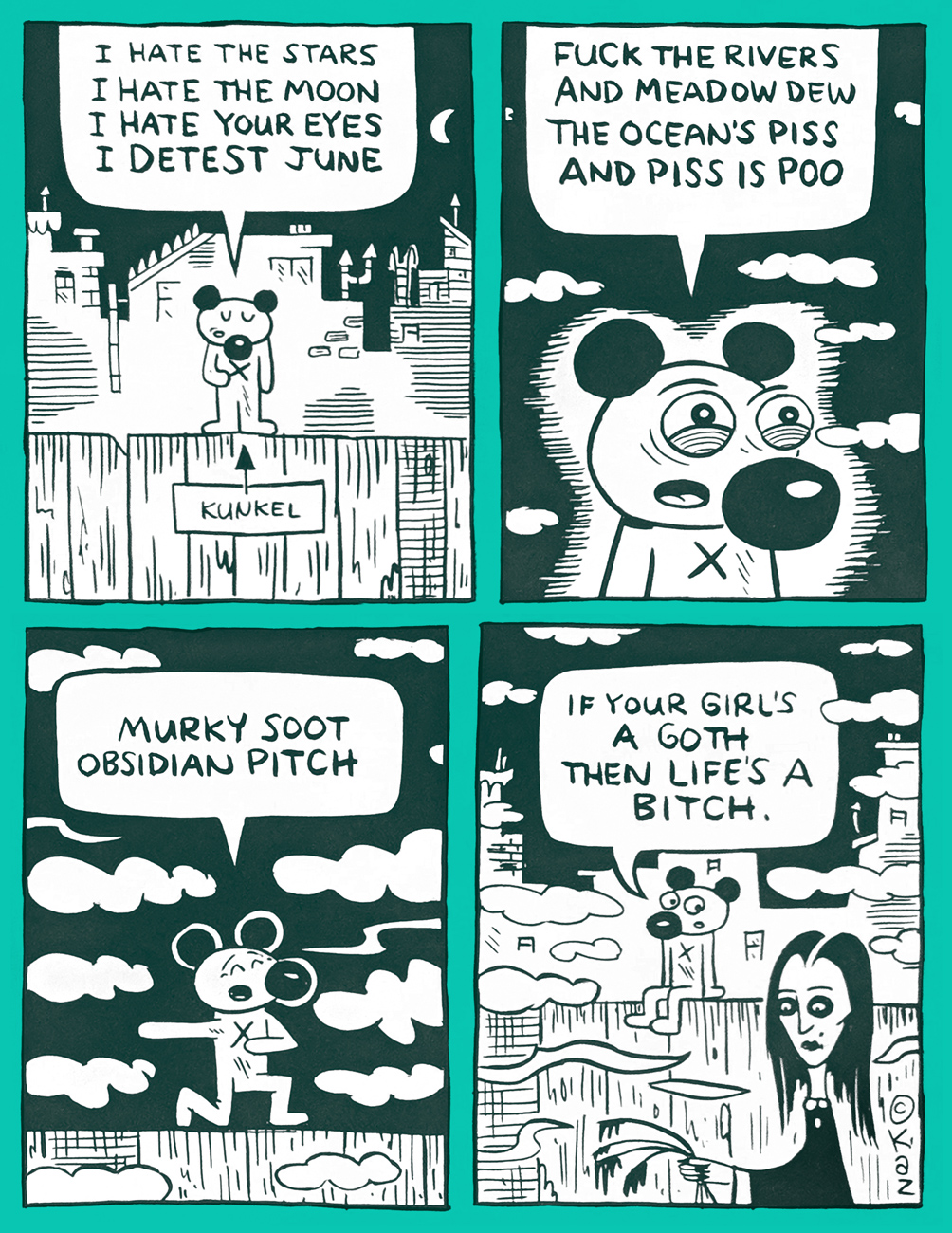 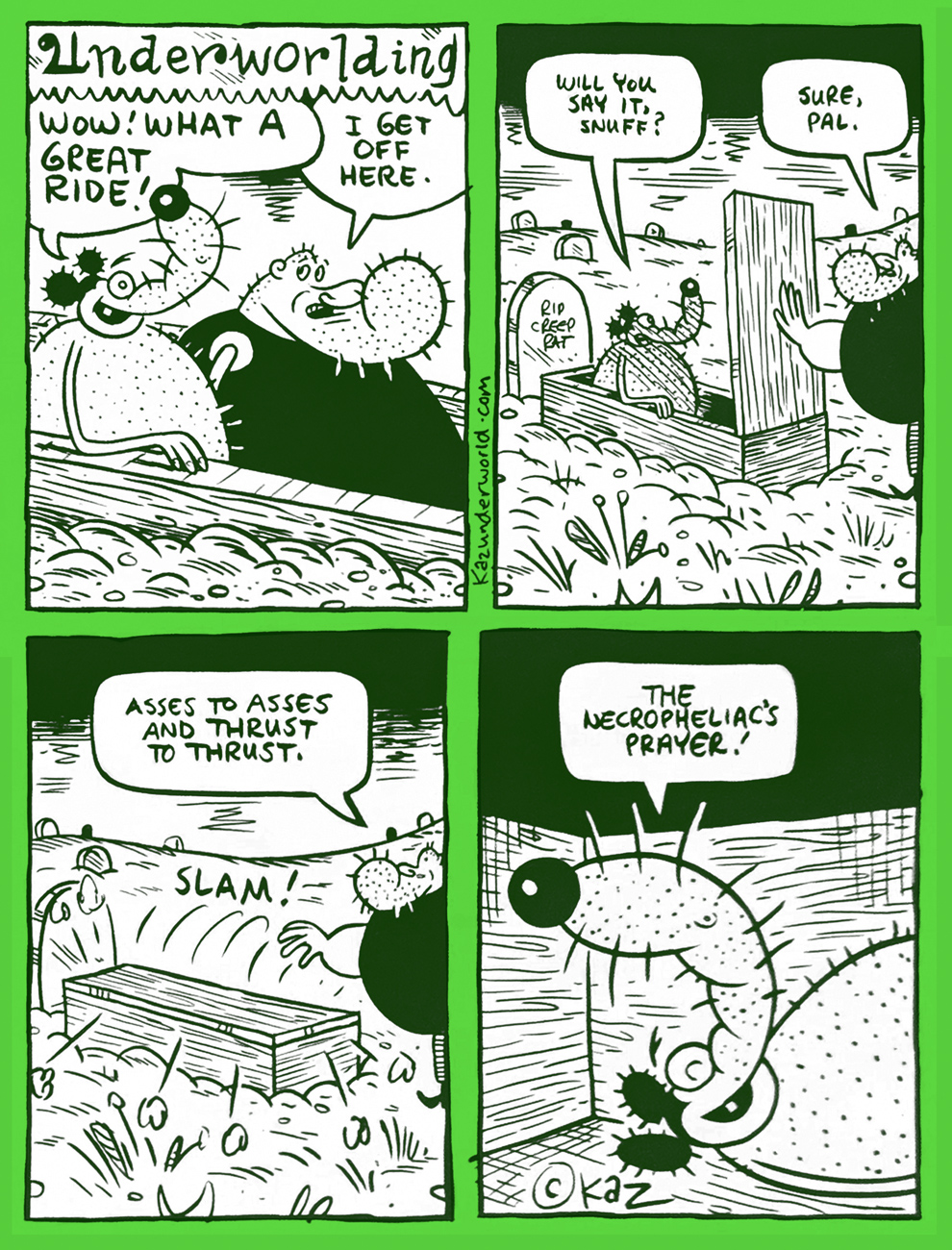 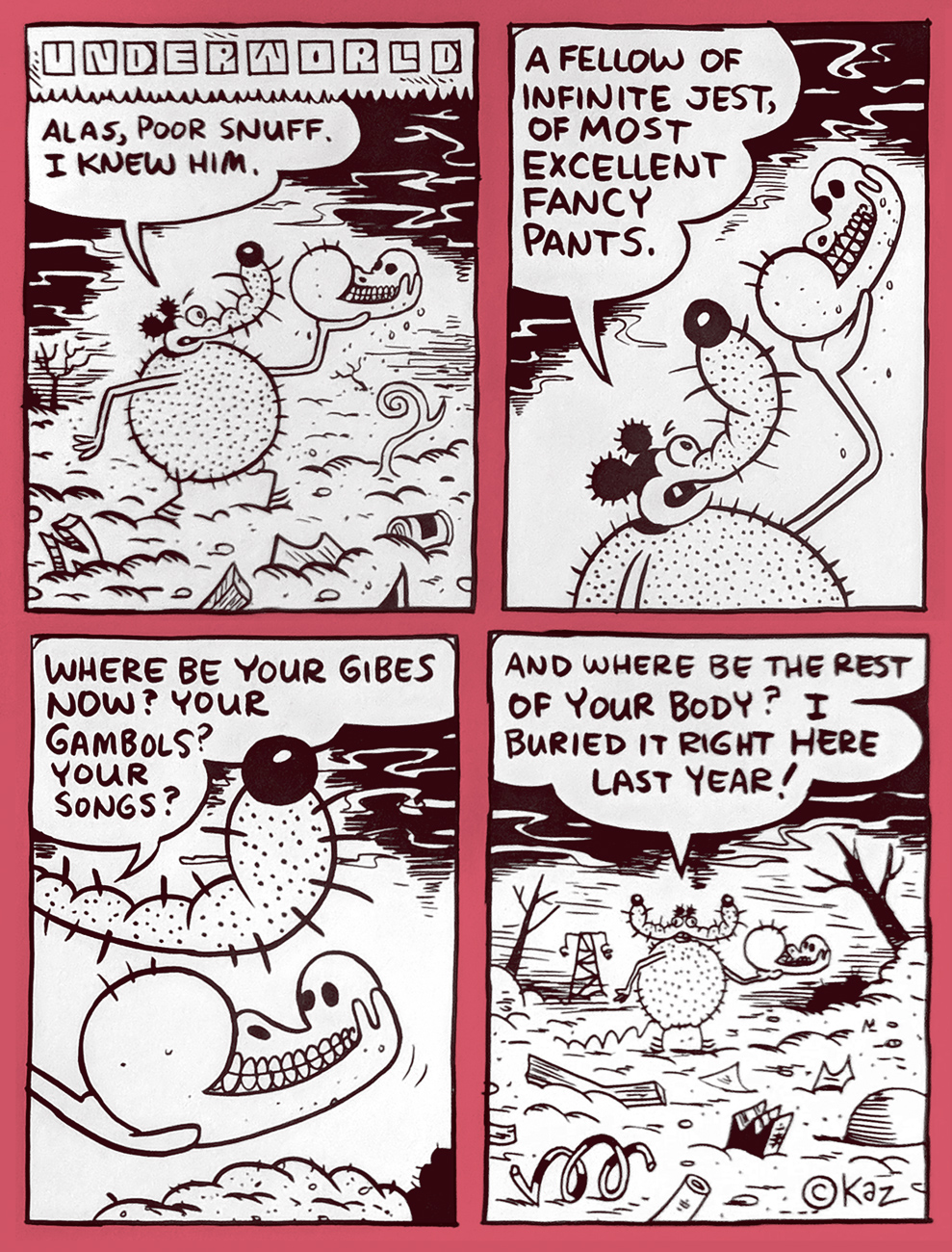 Fortunately, the discerning folks at Fantagraphics have thus far issued five Underworld collections, plus, a couple years back, an imposing omnibus, each of them wonderful, surreal, morbid and unnaturally comforting. Perfect Hallowe’en reading? You bet. Skrunk!