We hope this Christmas day finds you healthy and happy, whether you’re spending it quietly with the nearest and dearest, or stranded far from your family. We all do the best we can.

In a slightly different, yet somehow appropriate, vein… the following Christmas story by Max Andersson is a bracing antidote to the usual syrupy cheer of December 25th. As co-admin RG aptly put it*, in Andersson’s world, malevolence is the status quo, and this Jekyll-and-Hyde version of Santa Claus will fluff up the fur of the staunchest anti-Christmas reader.

As a bonus, we are including the no less cynical, but quite satisfying, back page of Death & Candy no. 1 (December 1999, Fantagraphics). Santa had it coming!

Ho-ho-ho (down the shaft), merry Christmas to all of our kind readers!

« Everything that happened to Archie happened to me in school, except that Archie always seemed to get out of it. » — Bob Montana

Despite the hundreds, if not thousands, of variably-abled hands that have toiled in the Archie Comics salt mines, the most important set of mitts devoted to the task was also the very first.

Archie creator Bob Montana* (1920-1975) knew what he was doing from the git-go. After all, he rubbed shoulders with the characters’ real-life counterparts from the Class of 1940: according to a 1989 Associated Press story, his buddy ‘Skinny’ Linehan became Jughead, football hero Arnold Daggett became Big Moose Mason; principal Earl MacLeod gave us Mr. Weatherbee and school librarian Elizabeth Tuck inspired Miss Grundy… and so on.

Montana was also that rare cog in the Archie machine: an autonomous writer-artist. This served him well in the newspaper strip world: he débuted the Archie feature in 1946 and remained in charge, dailies and Sundays, until his 1975 passing. I do prefer Samm Schwartz’s Jughead, but Montana drew the definitive version of every single other member of the Riverdale ensemble. In particular, as you’ll witness, Betty and Veronica were never slinkier.

And a bonus New Year’s-themed one for the road!

And with this… Merry Christmas, everyone!

*On the Archie plantation, as with the Harvey gulag, we can safely dismiss the founders’ specious and strident claims of having created their cash cows. In this case, Archie “creator” John Goldwater‘s original mandate to Montana was essentially to riff on popular radio show The Aldrich Family (1939-1953).

« She kept her ears permanently tuned to the chicken voices outside, so knew immediately when a coyote had crept into the yard, and barrelled screaming for the front door before the rest of us had a clue. » ― Barbara Kingsolver

Given how muted the holiday season is likely to be for most of us, and in light of how much our readers appear to enjoy our past Christmas offerings — (all year long!), I’d thought I’d get an early start on the festivities.

Here’s a fine, but truly obscure little Christmas fable. It was buried in the back of an issue of The Unknown Soldier, at a time when the DC war line was well into its final decline.

According to editor Paul Levitz, Christmas Dinner‘s script had been purchased six or seven years earlier by his predecessor Archie Goodwin but had lain fallow in the interim. It was written by one Janus Mitchell (his sole credit in comics, but we may be in the presence of pseudonymous shenanigans) and was finally assigned for illustration to Teny Henson (often credited in the US as ‘Tenny Henson, as he is here), one of my favourite creators from the ranks of the Filipino Komiks community. In America, Henson’s work mostly appeared in DC publications for about a decade (1974-83), beginning with the plum commissions of inking a returning Sheldon Mayer (post-cataract surgery) on his Rudolph the Red-Nosed Reindeer Limited Collectors’ Edition giants, and inking Ramona Fradon‘s pencils on DC’s underrated second revival of Plastic Man for a pair of issues. All in all, Teny flew under the fanboy radar, chiefly providing artwork for mystery and war short stories, and always at a high level of craft and inspiration.

I love the economy and precision of his line, his limpid storytelling, and his mastery of an aesthetic merrily at play in the sweet spot between the cartoonish and the representational. Fittingly, he went on to work in the animation field.

« … there arose such a clatter,
I sprang from my bed to see what was the matter.
Away to the window I flew like a flash,
tore open the shutters and threw up the sash. » ― Clement C. Moore, A Visit From St. Nicholas (1823)

Not too long ago, we glanced at the interesting case of Tower’s teen line, another instance of works insufficiently popular to be properly reprinted, yet still sought after by collectors and aficionados and consequently on the pricey side. And so it is within this limbo that Tippy Teen and Go-Go and Animal find themselves consigned, in the rather fine company of Sugar and Spike and Angel and the Ape. Let’s not strand them there for the duration, please.

So why do I consider Tippy Teen superior to Archie? For one thing, while there’s some underwhelming artwork to be found here and there (sorry, Doug Crane), there’s nothing dismal (no Al Hartley, no Dick Malmgren, no Gus Lemoine, no Stan Goldberg…), and the writing is generally superior, thanks to, among uncredited others, the great Jack Mendelsohn (recycling and updating his old scripts, but that’s not the end of the world).

Here’s a little seasonal piece I find quite witty and charming. The well-paced work of an anonymous scripter and my beloved Samm Schwartz, it appeared in Tippy Teen no. 18. The whole issue’s quite solid, and since it’s in the public domain, you can enjoy it right here. 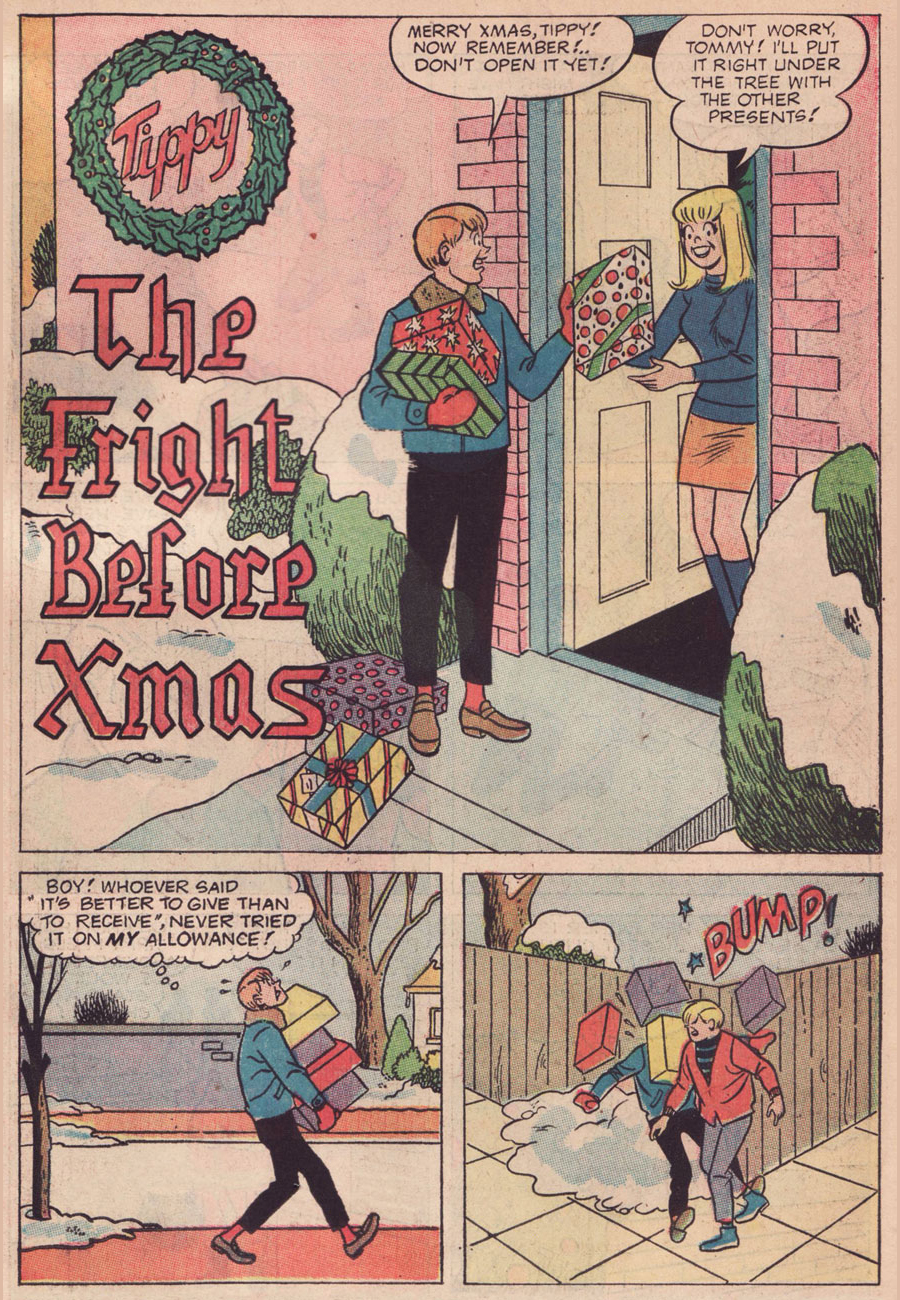 Irving Phillips (1904-2000)…« has been an actor, a violinist, a Hollywood script writer, the Humor Editor of ‘Esquire’ magazine, a playwright, as well as a very successful syndicated cartoonist.* »

He was most notably the creator of The Strange World of Mr. Mum, which was published from 1958 to 1974 (the Sunday edition began in 1961); at its peak, the strip appeared in 180 newspapers.

Mr. Mum, as his name suggests, is the silent observer of various strange happenings. Anything can, and does, happen in Mum’s world, and much of it is delightfully surreal.

Today, as befits the season, we propose a handful of Christmas (and post-holiday) themed Mr. Mum Sundays.

As Mr. Mum himself might say, were he ever inclined to chime in: « Have a Merry Christmas! » May you find some good comics in your holiday stash. And try Joe’s Federal Fling… it’s tastier than eggnog.

Craving more Mr. Mum? Then scoot over to Ger Apeldoorn’s The Fabulous Fifties blog, where a veritable Mum trove awaits !

*quoted from a interview with Mr. Phillips in Cartoonist Profiles no. 4, (November, 1969).