« I love the scents of winter! For me, it’s all about the feeling you get when you smell pumpkin spice, cinnamon, nutmeg, gingerbread and spruce. » — Taylor Swift

It occurred to me, just the other day that I’d failed to feature, over the course of five and three-quarters countdowns, anything by Gene Colan. And this despite the fact that I’ve always enjoyed his work and his undeniable adroitness within the horror genre.

Still, I decided to sidestep the obvious touchstone, his monumental run on The Tomb of Dracula, and opted instead for another of his big series at Marvel: Howard the Duck.

I was a fervent fan of the series as a kid, but I honestly haven’t returned to it in decades. Which is not to say that I’ve forgotten it. There’s no doubt that I should give it a fresh look — I’d probably get more of Steve Gerber‘s jokes than I did as a twelve-year-old — but in the interim, let’s focus on a couple of pertinent issues.

I won’t leave you in suspense! On to the following issue…

And that’s it! Steve Gerber had a refreshing knack for subverting and upending the Marvel formula: instead of some drawn-out, epic standoff, Howard disposes of the threat — a threat worth two cover features! — in a couple of panels, then the story moves on… to another range of targets.

« Taking sartorial risks and not following other people is what makes you stand out. » — Zac Posen

I was planning a big commemorative post for today, but I got tangled up in my calendar and realised in time that I was a couple of weeks off. So instead, I’ll just blow off a little steam.

Some cartoonists are born character designers. Others, not so much. The Rhino, a Stan Lee-John Romita Sr. creation, first appeared in The Amazing Spider-Man no. 41 (Oct. 1966, Marvel), soon after Steve Ditko‘s abrupt but quite justified resignation. Isn’t that just a dog of a cover? (pencils and inks by Romita, colours by Stan Goldberg).

Somehow, Daredevil seems to wind up with more than his share of poorly-attired villains. It’s as if they know he’s blind and won’t judge them too harshly on sartorial grounds.

The Beetle first scurried into view in Strange Tales no. 123 (Aug. 1964, Marvel), tackling the Human Torch (and The Thing). Too bad it wasn’t Doctor Strange he was sparring with, since his threads would then have been designed by Mr. Ditko instead of by Carl Burgos.

He then went on to bug the aforementioned ‘hornhead’. This is Daredevil no. 34 (Nov. 1967); pencils by Gene Colan, inks by Bill Everett. Why does everyone on stage appear to wear a size 15 shoe? At least!

The costume of the Tarantula (a glorious Gerry Conway-Ross Andru creation!) is such an impractical conceit that they pretty much have to use him in the same position on every cover. The guy can barely walk in such, er — calzado, let alone fly at Spider-Man with such force. Just a lousy idea, on every level — tarantulas bite, they don’t sting, Gerry.

Should you hanker for more of these, er… dressing-downs, you might want to inspect our earlier instalment along these lines, « You’re going out wearing THAT? ».

« He was offered a sloe gin fizz in a pink frosted glass by a young woman who removed her glass eye and sucked on it while discussing the moral imperatives of the sponge boycott in Brooksville, Florida. » — Harlan Ellison, ‘Neon’.

In 1973, Marvel was trying all sorts of things to bolster its market presence. They even dared to tread where even the venerable Weird Tales had never quite succeeded. The Haunt of Horror was a prose fiction digest that strongly showed its comics roots. It offered a mixture of classic material (Fritz Leiber’s Conjure Wife, a piece by Robert E. Howard) and of contemporary genre practitioners: Harlan Ellison, Ramsey Campbell… featuring a score of illustrations slapped together by Marvel’s less superhero-limited alumni, namely Gene Colan, Mike Ploog, Frank Brunner, Walt Simonson and Dan Green. After two issues, Marvel called the whole thing off, licking its wounds, but soon revived the title as a b&w comics magazine, this time eking out five issues (May 1974 – Jan. 1975) plus a 1977 issue of Marvel Preview.

As for me, I picked it up for the rare short story by the nonpareil R. A. Lafferty, Ghost in the Corn Crib.

In the end, you might say that this short-lived publication is best known for a screwup: indeed, the notoriously disorganized Marvel Bullpen messed up the page order of Harlan Ellison‘s contribution to the first issue, Neon. Never one to let such things slide, Harlan made sure that a correct version was printed in the second issue. Score one for the good guys.

It’s difficult to impress me with a magician, unless we’re talking real-life magicians with a strong skeptical streak, like James Randi or Ricky Jay. Given that the concept of a person who has access to ‘mystical’ forces and who can manipulate beings (supernatural or otherwise) has been around for as long as humans have been able to communicate with one another, be it through grunts and squeals, it’s pretty damn difficult to come up with a new wrinkle to this old tired nag. Having no previous experience with the series, I had no high expectations for Steve Ditko‘s Doctor Strange, but I was pleasantly surprised. I liked the earnest, solemn Dr. Strange from the beginning, but it’s Ditko’s mind-boggling, soaring surrealistic landscapes that bloomed over time that really impressed me. It’s not an easy feat to make the reader feel like he’s being transported into another dimension, but Ditko pulled it off beautifully, making us feel Dr. Strange’s disorientation as he gets sucked into yet another psychedelic terrain.

The Dr. Strange stories of the 1960s constructed a cohesive cosmology that would have thrilled any self-respecting theosophist. College students, minds freshly opened by psychedelic experiences and Eastern mysticism, read Ditko’s Dr. Strange stories with the belief of a recent Hare Krishna convert. Meaning was everywhere, and readers analyzed the Dr. Strange stories for their relationship to Egyptian myths, Sumerian gods, and Jungian archetypes.

What does this have to do with the current post? Precious little, actually. I’m a firm believer of not recycling dramatis personae past their due by date (defined, of course, as that time when their creator/author moves on to greener pastures, by design or because he has to). Doctor Strange moulded by other hands loses his raison d’être and becomes just another Joe in a funny cape, uttering ineffable, paranormal gobbledygook. Oh, sure, he’s aided by more mystical artifacts than before. How exciting… if you are excited by gadgets and gimmicks, that is.

He also encounters a lot of tentacles, apparently the most mystical, otherworldly apparitions *this* crew could think of. Welcome to 70’s (for the most part) Doctor Strange!

The Shambler from the Sea is scripted by Gardner Fox, pencilled by Frank Brunner, and inked by Sal Buscema and Ralph Reese: 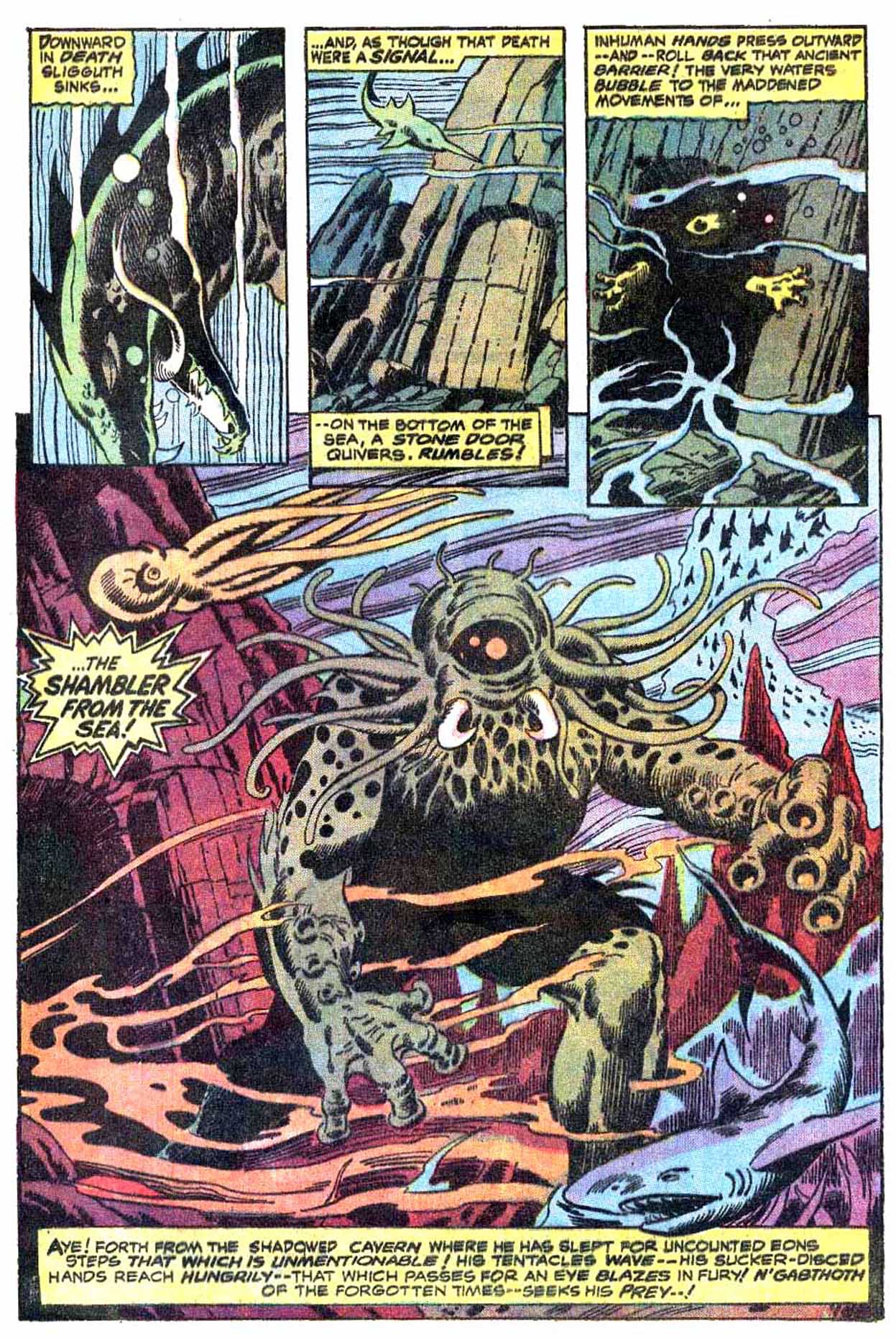 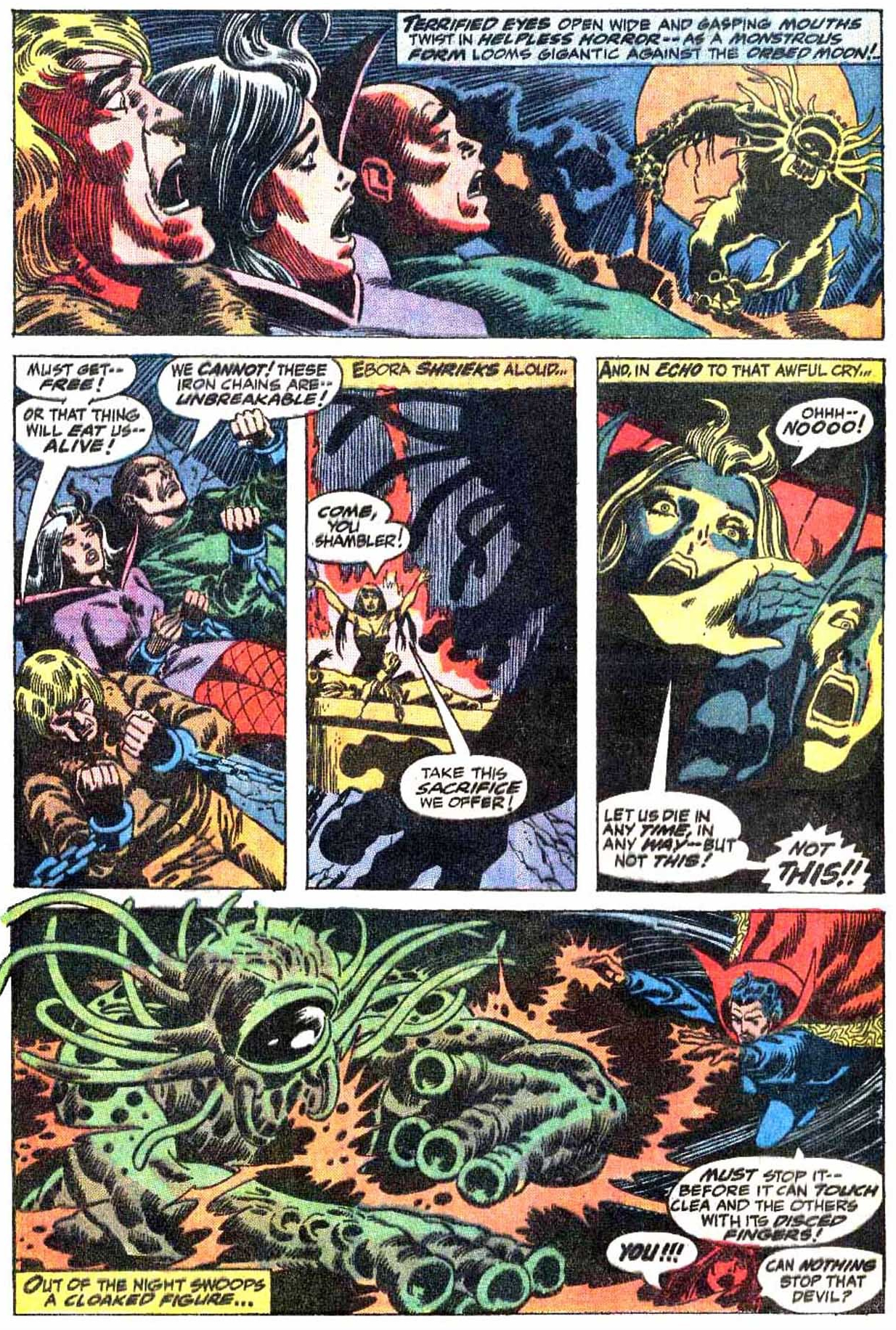 Through an Orb Darkly is scripted by Steve Englehart and Frank Brunner, pencilled by Frank Brunner and inked by Dick Giordano:

Mind Trip!, scripted by Marv Wolfman and drawn by Rudy Nebres, was published in Doctor Strange no. 22 (April 1977):

A Gathering of Fear! is scripted by Roger Stern and illustrated by Tom Sutton:

Wizard of the West Village is scripted by Chris Claremont and pencilled/inked… by a whole bunch of people: 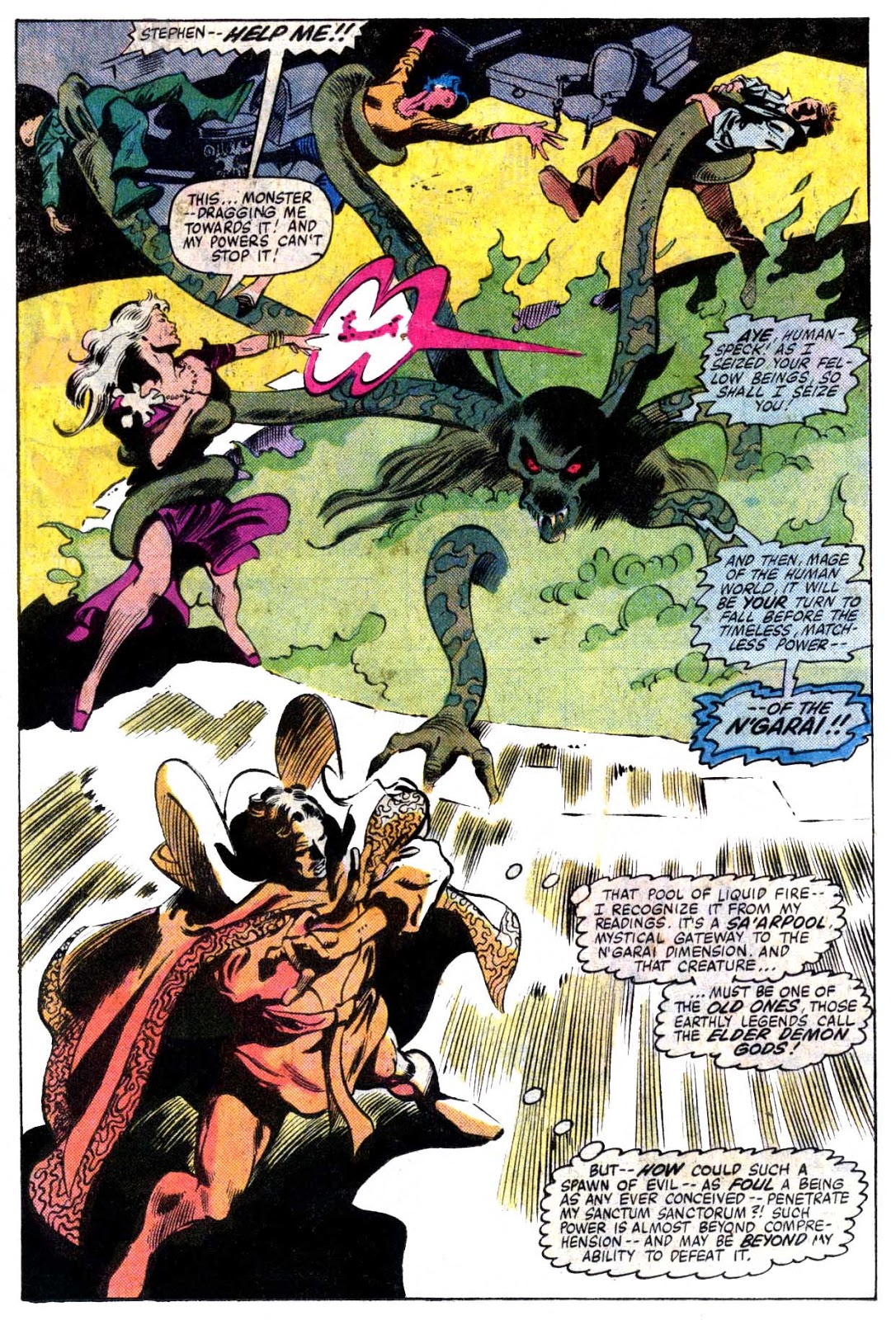 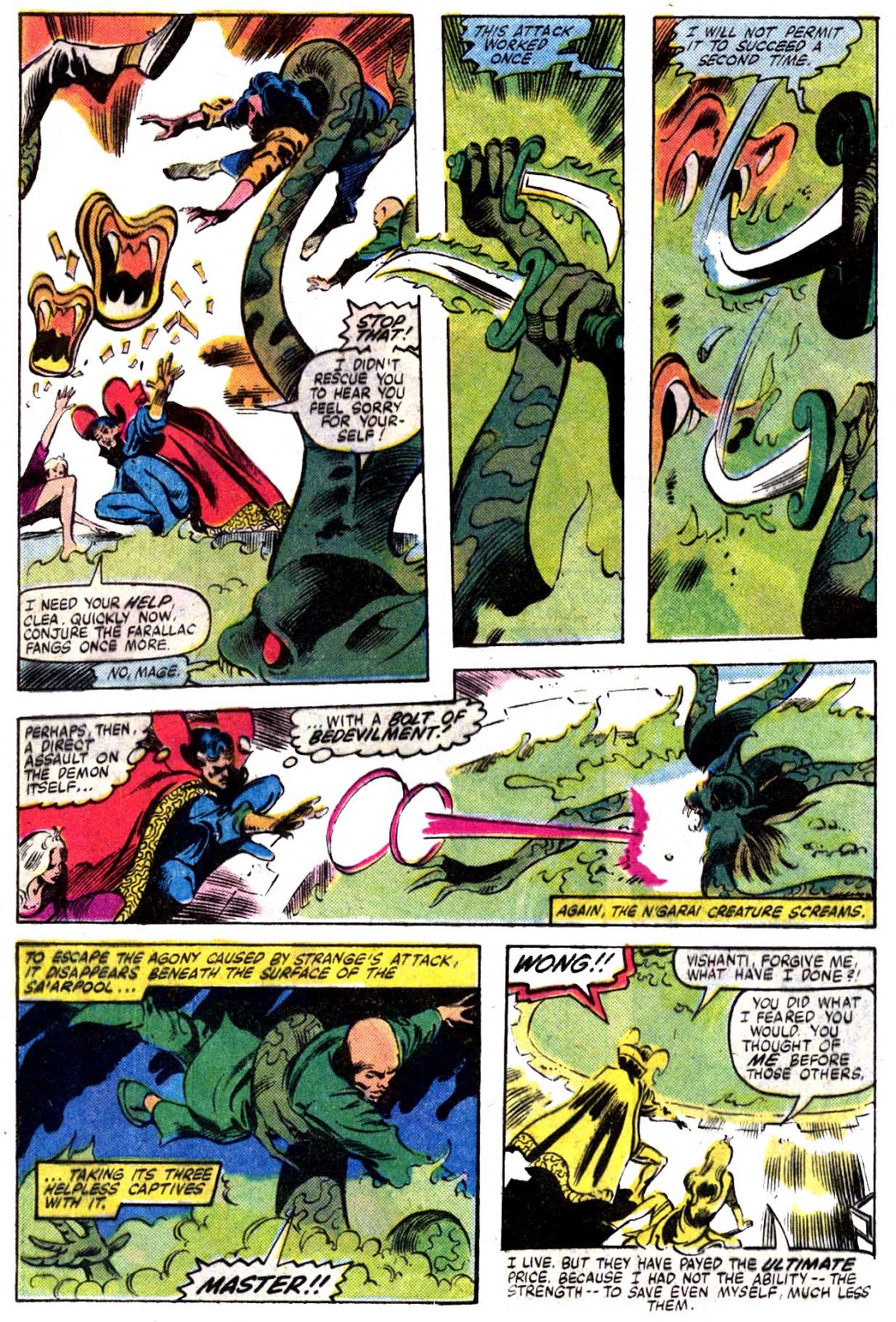 … and there you have it!

« Kate’s death scream gags stillborn in her throat as the tentacles dart toward her, slithering hungrily across her body. »

Here’s a quick association exercise: as fast as you can, name words that come to mind when somebody says “Dracula”. Um, fangs! Stake! Blood, cape, biting! … Tentacles? Say what?

It would have never occurred to me to look for tentacles in Dracula, giant-size or otherwise, so thanks to admin RG for this splendid suggestion.

You’re not sure those green things were tentacles? If it quacks like a duck, it may well be an aquatic bird – and if it slithers towards female “human flesh”, count it as tentacles! Call Them Triad… Call Them Death! is scripted by Chris Claremont, pencilled by Don Heck and inked by Frank McLaughlin. I have to say that the art is distinctly subpar, as far as I’m concerned.

Perhaps it’s the drab colours that weigh this down, and the original art would be a considerable improvement? Nope, sorry. 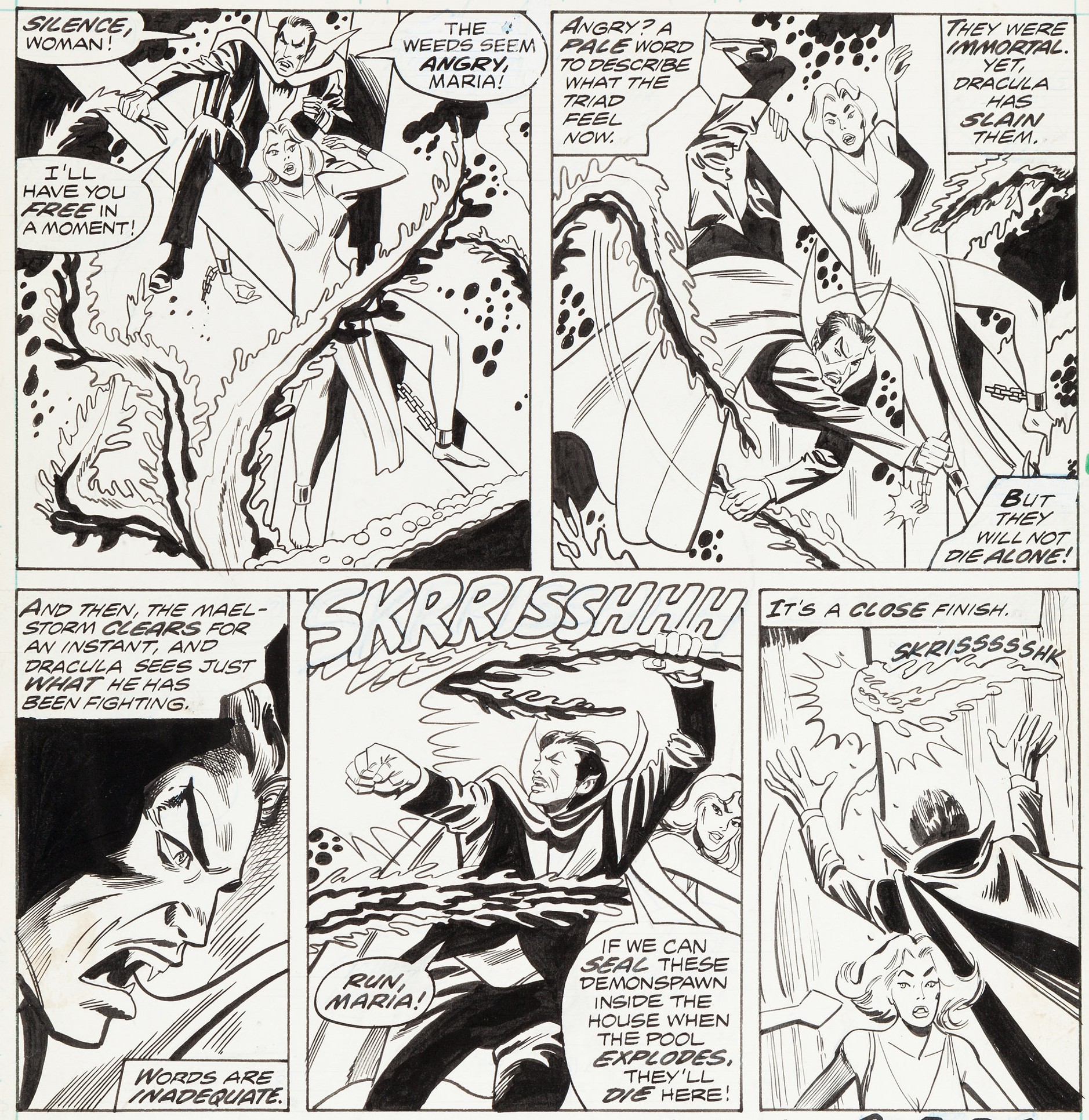 As further example of the ineptitude of this art team, a quick question: does this look like he’s slapping her?

However, I have no wish to engage in Don Heck bashing – he had his moments, it’s just that this story wasn’t one of them. Instead, I will direct you to this article explaining how Harlan Ellison mocked Heck once upon a time, several lifetimes ago. Also, ouch.

Harlan Ellison: There are guys who’ve got very minimal talents and it doesn’t matter whether they corrupt it or not. I could name them and would happily name them, but why bother? There’s no sense kicking cripples. I mean, all you have to do is open up comic books from Marvel and DC and take a look at them. You see these guys have a very minor-league talent and, to say, “Well, these people are wasting their talent” is ridiculous. I mean, they’re never going to be any better. What’s the name of the guy who used to do… over at Marvel… he use to do… [Pause]… the worst artist in the field.

Continuing our foray into Draculas of colossal proportions tangling with tentacles…

Sadly, the tentacles promised on the cover don’t really appear in the cover story. Time to move to another series —

What Lurks Beneath Satan’s Hill? (tentacles, obviously) is scripted by Marv Wolfman, pencilled by Gene Colan and inked by Tom Palmer.

The story continues in number 63 –

The Road to Hell! is scripted by Marv Wolfman, pencilled by Gene Colan and inked by Tom Palmer:

Next up (eventually), an equally random concept: Werewolf VS tentacles!