« Even without the benefit of philosophical reflection, anyone who has spent some time in an enclosed space with an excited bat knows what it is to encounter a fundamentally alien form of life. » (Thomas Nagel, What is it like to be a bat?)

Bats and octopuses, now there’s a combination that doesn’t often occur in nature – while both are admirable, fascinating animals, they’re not linked by lifestyle or environment, and neither is the other’s prey. Batman, on the other hand, has definitely tangled with many tentacled monsters in his time (which proves that he’s not a bat). I’m sure today’s post didn’t unearth *all* the octopuses that Batman has had the pleasure of defeating, especially those of a more modern vintage (with mostly horrible art, which is why I’m not too worried)… but today’s selection, you will have to admit, is quite fair.

The Voyage of the First Batmarine!, scripted by Edmond Hamiton, pencilled by Dick Sprang and inked by Charles Paris, was published in Batman no. 86 (September 1954).

Bat-Mite Meets Mr. Mxyzptlk (he must be from Poland, with a name like that), scripted by Jerry Coleman, pencilled by Dick Sprang, and inked by Sheldon Moldoff, was published in World’s Finest Comics no. 113 (November 1960): 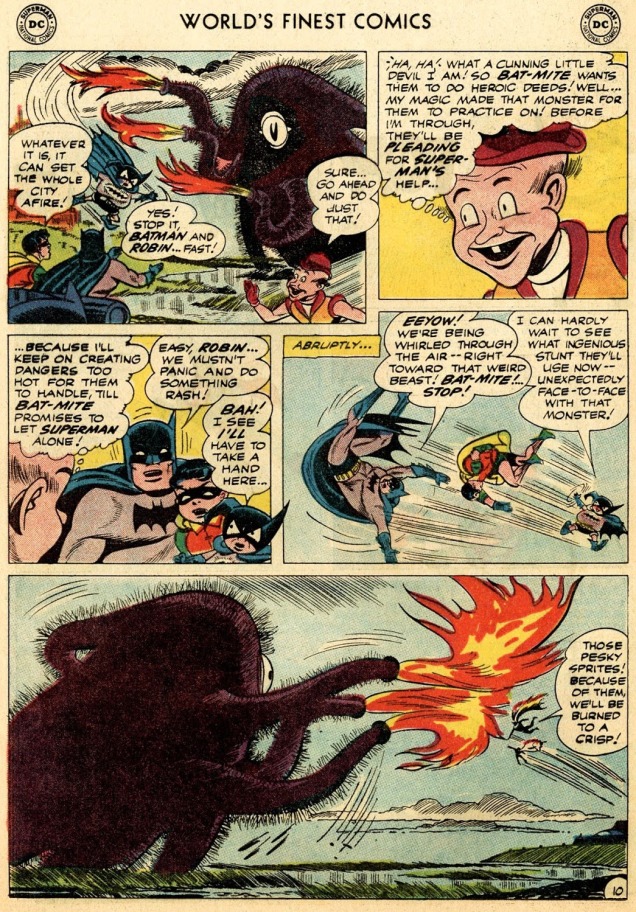 Justice League of America no. 27 (May 1964), with the cover pencilled by Mike Sekowsky and inked by Murphy Anderson:

The inside story, The “I” Who Defeated the Justice League! is scripted by Gardner Fox, pencilled by Mike Sekowsky, and inked by Bernard Sachs: 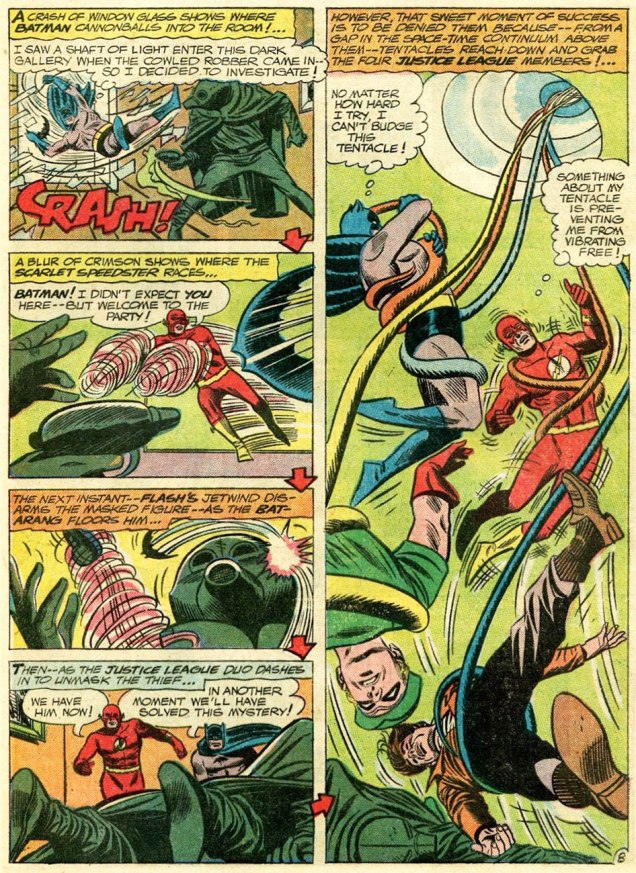 Batman no. 357 (March 1983). Cover pencilled by Ed Hannnigan and inked by Dick Giordano: 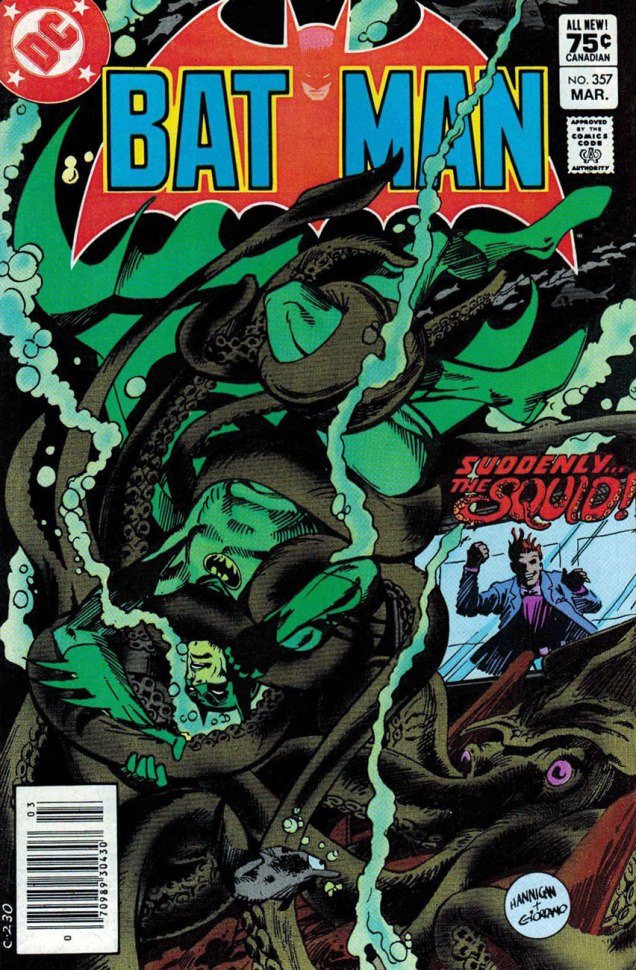 The cover story, Squid, is scripted by Gerry Conway, pencilled by Don Newton, and inked by Alfredo Alcala:

Since they threatened us with the continuation of the story, I followed up, and dug up more tentacles. Deathgrip, scripted by Gerry Conway, pencilled by Don Newton and inked by Dick Giordano, was published (as promised) in Detective Comics no. 524 (March 1983):

Enigma of the Death-Ship!, scripted by Bob Haney and illustrated by Jim Aparo, was published in The Brave and the Bold no. 142 (July-August 1978):

The pompously titled Leaves of Grass, Part 3: Comedown!, scripted by Alan Grant, pencilled by Dave Taylor and inked Stan Woch, was published in Batman: Shadow of the Bat no. 58 (January 1997):

Knightmares, Part 4, scripted by Tom King and illustrated by Jorge Fornes, was published in Batman no. 66 (May 2019): 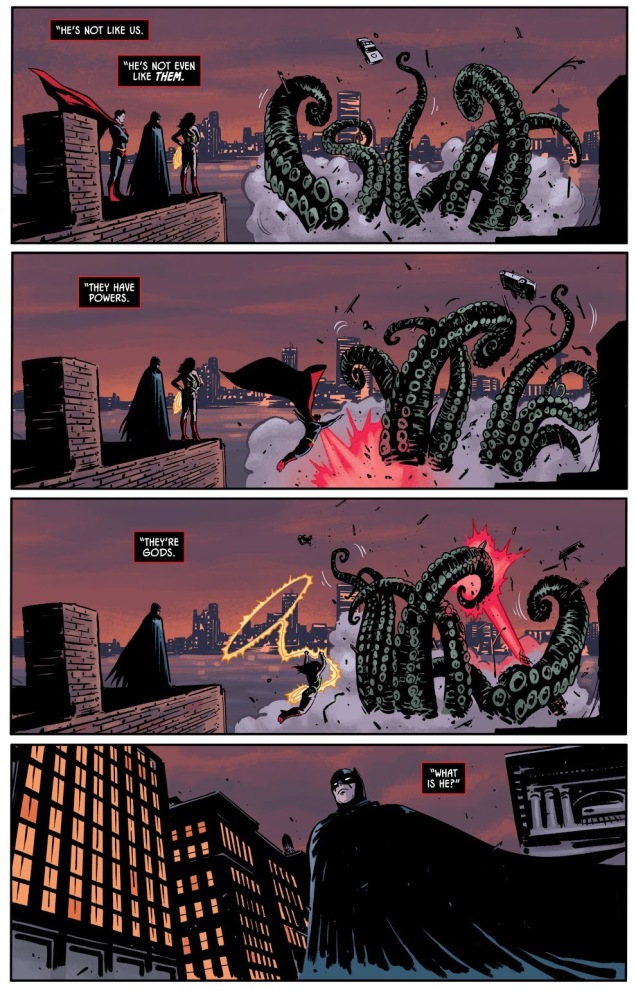 To conclude on a more pleasant note…

« Morticoccus is overpoweringly large and sinister! In this new world he can live — only if he destroys all other life around him — kingdoms and empires would crumble to dust at his deadly touch! Morticoccus waits in his prison — he waits to get out — and breed!! »

I apologize, but according to co-admin RG (whose sense of humour is apparently more morbid than mine) this is Contagion Week on Who’s Out There? Well, I suppose tentacled microbes and germs are as good a topic as any right now…

Our first foray into germs is This Beachhead Earth, scripted by Roy Thomas, penciled by Neal Adams and inked by Tom Palmer, published in The Avengers no. 93 (November 1971). The Vision collapses, the Avengers send Ant-Man into his body to figure out what’s amiss. I made an earnest attempt at following the plot, but the bad dialogue made my head hurt. Did you know that the scream of an ant « is like the wailing of a forsaken child »?  The story includes gems like « frankly, my dear, I don’t give an hydroelectric dam» and « therein lies the only true superiority of the educated man — that he analyzes — dissects — probes — reconstructs ». Oh, the glorious mix of bad puns and pompous lines! 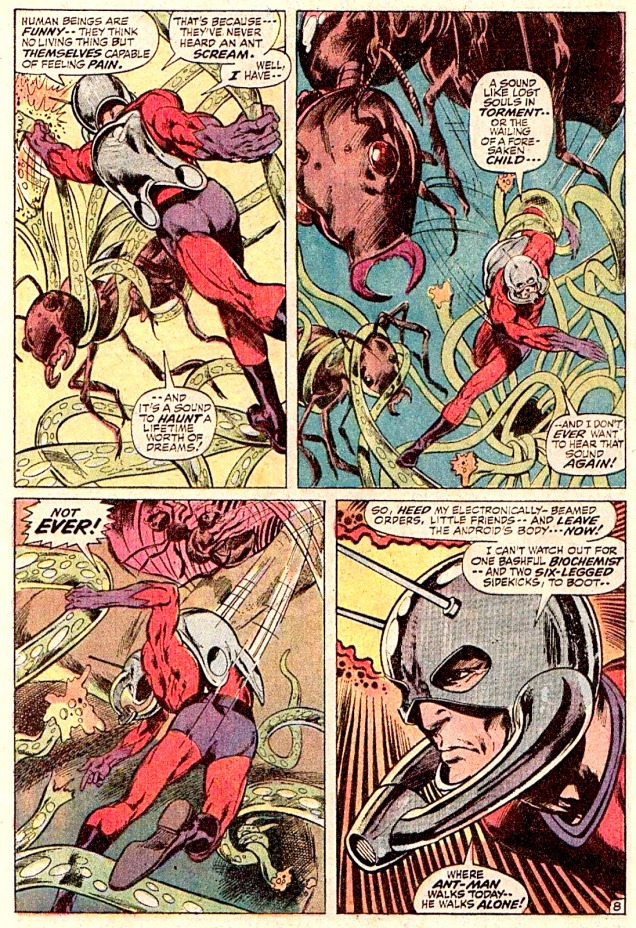 You can read this « paltry prologue to the most portentous Avengers saga of all! », the work of a fellow who’s just a little too fond of calembours and his thesaurus, here.

Continuing on a grand scale – this time, it’s the grandest scale there is! – we pay a visit to the aforementioned Morticoccus (sinister a’plenty, you shall surely agree), arguably the most fatal disease known to mankind, or at least the deadliest to spring from Jack Kirby‘s fertile mind (ouch) . As for me, I really like the giant, lethal bats.

Our third medical study is a little case of fungoid infection that even boasts a name. M’Nagalah had a rather complicated birth. Created by British horror writer Ramsey Campbell for his cycle of H.P. Lovecraft pastiches (to be more precise, the creature first appeared in the short story The Inhabitant in the Lake in 1964), it was soon adopted by DC Comics, after doubtlessly being bowled over by its puppy eyes while visiting a no-kill shelter of the Great Old Ones. It was first borrowed for Swamp Thing no. 8 (1974) and afterwards used as per the Russian idiom “a plug for every barrel“. Just look at this mess.

Challengers of the Unknown no. 82 (August-September 1977), scripted by Gerry Conway, pencilled by Michael Netzer, and inked by Joe Rubinstein, starts off with a just mild (if disgusting) contamination… 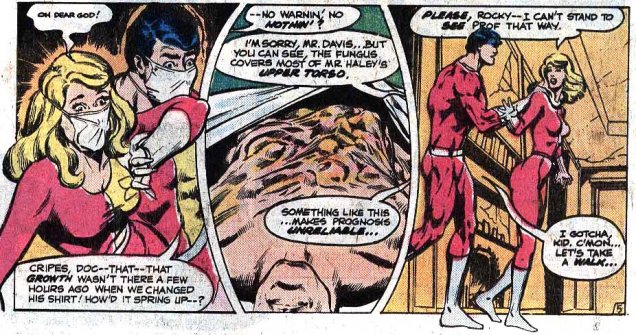 That fast progresses to the old “unspeakable, indescribable horror” (yawn).

Swamp Thing gets dragged in, and professor Mark Haley blooms prettily in the beginning of Challengers of the Unknown no. 82 (October-November 1977), also scripted by Gerry Conway, but this time pencilled by Keith Giffen and inked by John Celardo… 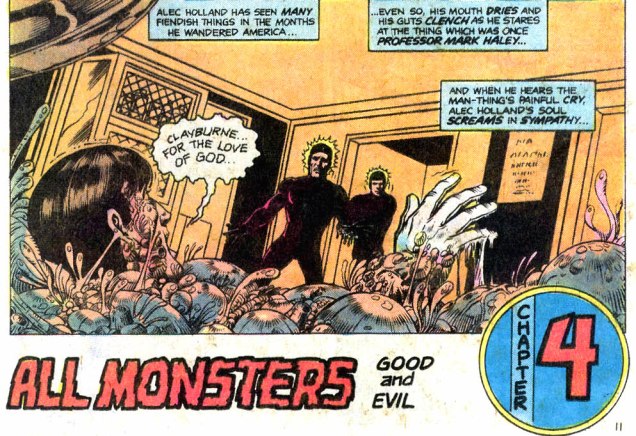 It is soon explained that this is actually some Elder God trying, as usual, to take over the planet, blah blah blah. 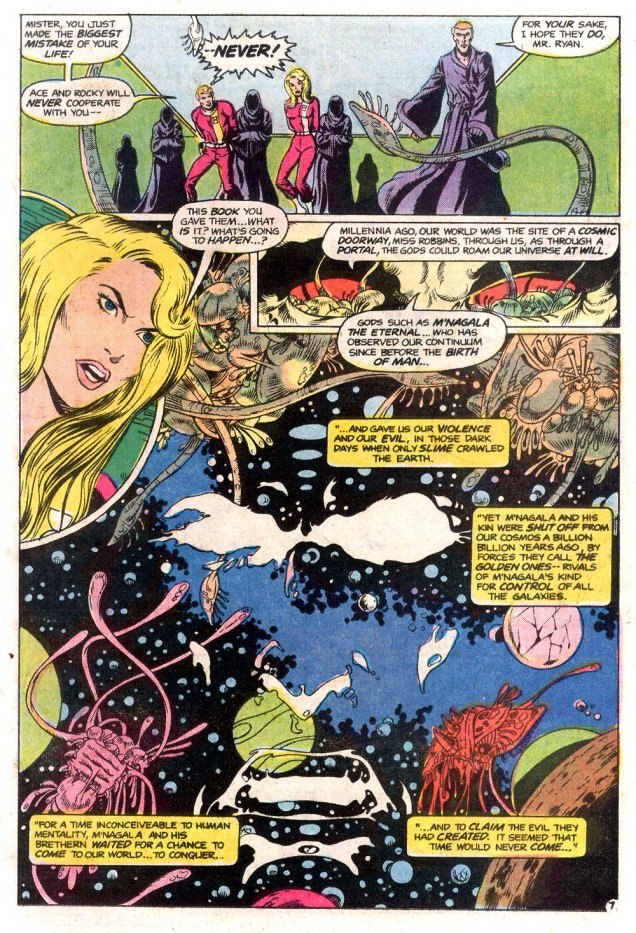 Wishing everyone health and bon courage in these trying times, especially to our poor American friends who seem to be caught in the middle of the virus vortex… And a last strip to end on a more positive note:

Oh, all right, one more: