« There is nothing new under the sun but there are lots of old things we don’t know. » — Ambrose Bierce

Here’s an unusual specimen: a two-headed, twin-gendered Australian cartoonist. Beryl Antonia Yeoman (1912-1970, b. Brisbane, Queensland) formed, in 1937, a cartooning partnership with her brother, Harold Underwood Thompson (1911-1996, b. West Kirby, Cheshire) when they adopted the nom de plume of Anton. 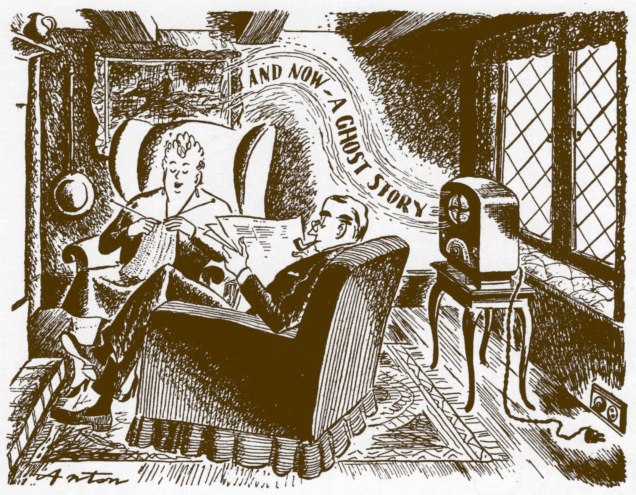 From the sound of it, Beryl was the power behind the throne, as she produced the Anton cartoons on her own during Harold’s active duty in the Royal Navy during WWII. The pair reconvened after the war and created wonderful cartoons for such publications as Punch, Lilliput, Men Only (ha!), Tatler, The Evening Standard (solo Harold!) and Private Eye. Beryl was the only female member of Punch’s exclusive Toby Club.

Today, a charming bistro named in honour of the artful siblings still operates in Wells, Somerset; it features Anton’s art on its walls. How’s that for posterity?

This slyly cozy cartoon made the cut for the splendid 1952 anthology The Best Cartoons From Punch.

And while we’re on the subject of ghostly radio stories, give one of these a try.