« What’s the point in eternity… if nothing ever changes? » — White Ant gets in the final bon mot (Captain Oblivion no. 1)

In the mid-1980s, the surprise success of Kevin Eastman and Peter Laird‘s Teenage Mutant Ninja Turtles touched off a veritable avalanche of ever crappier, hastily-assembled and cheaply-produced knockoffs — at least Eastman and Laird initially meant their creation as a joke. Oh, there were some real gems amidst the rubbish, but as Sturgeon’s Law tells us, the bad greatly outweighed the good, let alone the great. This is now known as the Great 1980s Black and White Comics Glut.

Among the good-to-great (well, to my taste) were a score of short-lived onomatopoeic humour anthologies such as !Gag! (Harrier), Honk! (Fantagraphics), Splat! (Mad Dog Graphics), Bop, Buzz, Twist (along with the venerable Snarf, all from Kitchen Sink)… the mutant progeny of Zap Comix, I suppose.

It was within the pages of Honk! that I was greeted by such across-the-pond talent as Eddie Campbell, Glenn Dakin, Phil Elliott and Paul Grist. Their work provided a sorely-needed gust of English country air to the superhero-fatigued reader, though one had to keep both eyes open, as alternative comics publishing in the ’80s was a maddening mixture of whack-a-mole and ‘throw stuff at the wall and see what sticks‘.

Now that the stage is set, I’ll share some of my favourite Dakin strips. He’s been a busy chap, creating several solo series: Temptation, Captain Oblivion/Abe Rat, Robot Crusoe; collaborations: Paris: the Man of Plaster (with Steve Way), Mr. Day and Mr. Night, The Man From Cancer and Greenhouse Warriors (all with Phil Elliott), as well as YA novels (the spooky Candle Man) and animation (the astonishing Shaun the Sheep).

Today, I’ll focus of my very favourite Dakin creation (his most understated and personal), the fancifully autobiographical Abe Rat. 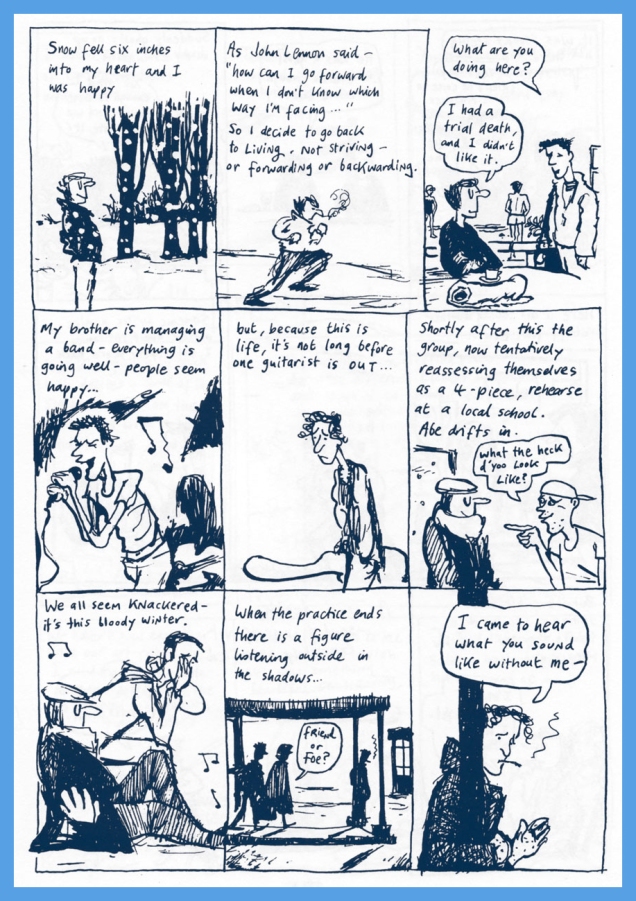 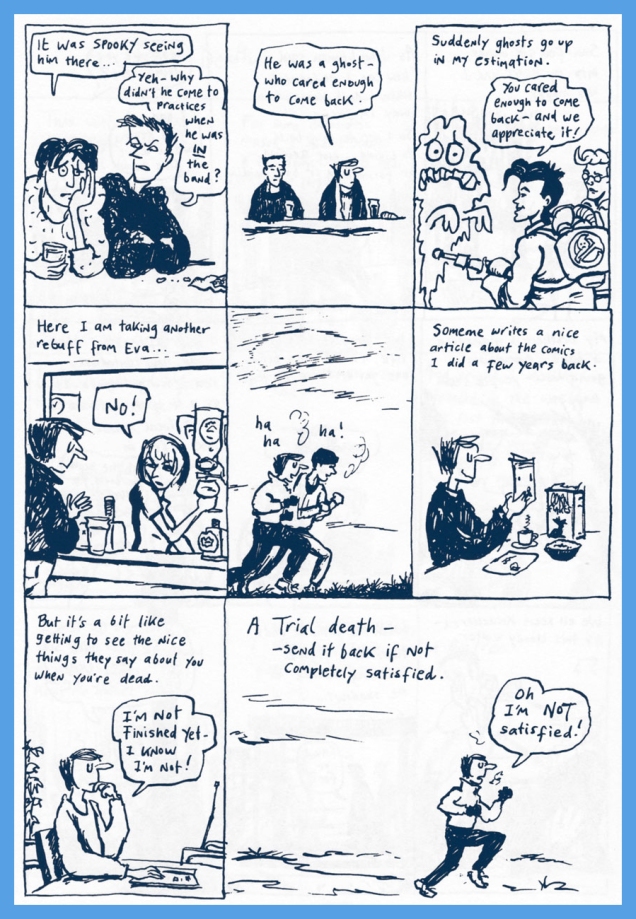 Dakin’s comrade-in-ink Eddie Campbell (Abe’s his fave Dakin strip too) provides the introduction to the collection, and therein shares these thoughts: « Back when we were doing our little photocopied comics (what I term ‘small press’) in the ’80s, we constantly challenged each other to take the comics form in new directions. Dakin evolved in exciting ways in his Abe stories. The were autobiographical, but more concerned with the inner life than the physical one. He arrived at an approach which I termed ‘discourse’. He would devise characters and symbols, and borrow others, combining them in argumentative juxtapositions. There would be passages where he’d use a character from history or a novel to push his contemplation towards a resolution. Once he even called a halt to proceedings and ran a variant ending. »

Thanks for reading, hope you enjoyed making Abe’s acquaintance.