When it comes to Jim Benton‘s work, it seems I got in on the ground floor, thanks to a friend’s shrewdly chosen gift of the man’s first cartoon collection, ‘Dealing With the Idiots in Your Life‘, twenty-nine years ago this Christmas. Yikes!

In a way, Benton’s nearly too obvious a subject for a post: his work is everywhere you turn, but such a large audience seems to have been reached at the cost of relative anonymity. In other words, people know his work, but they may not know his name. I’m sure his name does, however, enjoy some currency with a couple of generations of younger readers familiar with his Dear Dumb Diary (nearly 10 million sold!) and Franny K. Stein (over five million sold) series.

Given his intimidatingly formidable output, I’ll stick to material from his first collection, which I like best anyhow… which is not to say, echoing what all and sundry tell Sandy Bates in Stardust Memories, that I strictly prefer “the early, funny ones“. Mr. Benton is possibly even funnier — or at least more sophisticated — today than he was at the dawn of his career, but these early cartoons are less ubiquitous than this century’s crop.

In closing, a bonus one from quite recent days. While I’m less fond of the digital tablet aesthetic of his latest work, his writing has acquired some even sharper edges. Sadly, this strip will likely be relevant only to medieval citizens of the German town of Hamelin, right?

« It only hurts when I exist »

Another astonishing madman from the Playboy magazine stable, Bernard Kliban (1935-1990) is mainly remembered for his much-merchandised « Cat » cartoons, but he was a true master of a vein of absurdist humour that few mine with such success. It’s high time for a collected œuvre or at the very least a comprehensive anthology. Fantagraphics, are you listening?

These pieces were gathered in the Playboy’s Kliban collection (1979) and its sequel, Playboy’s New Kliban (1980). Every single one of the man’s books (of which only the Cat books remain in print, I believe) is assuredly worth seeking out, but fair warning: left to his own devices, and away from the Playboy ethos, Kliban goes much farther afield into (extremely inspired) absurdity and abstraction.

B. Kliban may not be a name that’s familiar to many (unless you’re one of those people who pays attention to the signature beneath a painting), but his cats will certainly ring a few bells, so to speak. They can be found on stickers and greeting cards, mugs and t-shirts, and, above all, calendars. Kliban’s Cat, a collection of cat cartoons that was published in 1975, was an instant hit, and its popularity hasn’t waned since.

One would expect something that’s been around for so long to be terrible and generic and banal (just think of Garfield merchandise – yuck!), yet each year a new calendar comes out, and each year it’s still stunningly beautiful. Kliban lamentably and tragically died in 1990, at only 55. Either he left behind an impressive number of cat paintings, or his ghost still comes out from retirement from time to time to continue the tradition. I mean, look: 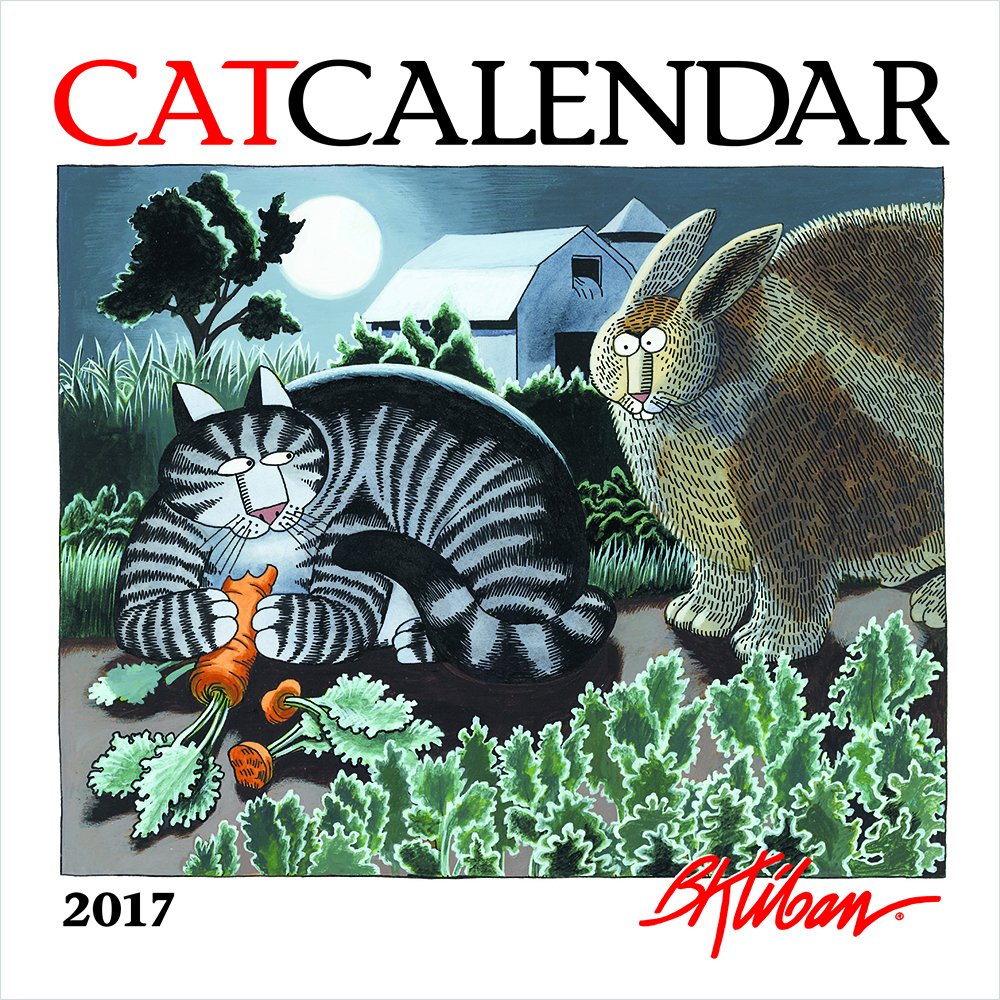 « People assume I’m gaga about cats. I like them, but I’m not silly about them. Cats look like cartoons. There’s something funny and vulnerable and innocent about them. » (from a 1978 interview.)

Maybe these images are created by a dedicated team of artists hell-bent on imitating Kliban’s style as closely as possible, adroitly channeling his absurd sense of humour, dressing in the Kliban uniform (jeans and sandals) to increase their precision. After all, if talented art forgers can copy a Vermeer or Picasso so meticulously that it confuses the experts…

As lovely as his felines are, it’s too really too bad that Kliban’s other books (most of them published by Workman Publishing) have been swallowed by the hungry maw of obscurity. His peculiar sense of humour, his love of puns and his unorthodox approach to everything from relationships to kitchen implements wonderfully combine with stylish art to create a glorious mindfuck in cartoon form. His books – Never Eat Anything Bigger Than Your Head, and Other Drawings (1976), Whack Your Porcupine, and Other Drawings (1977), Tiny Footprints, and Other Drawings (1978), Playboy’s Kliban (1979), Two Guys Fooling Around With the Moon (1982) and Luminous Animals (published by Penguin Books in 1983) – will make you wonder if Kliban ever underwent psychoanalysis, whether his doctor managed to hold on to *his* sanity after their sessions, and whether you should get psychoanalysed, too, because why else would you be enjoying these cartoons so much? The NY Times did a tribute to Kliban when he died in 1990, and all the author of the piece could say, somewhat diplomatically, is that « the books that followed Cat consisted mostly of extremely bizarre cartoons that find their humour in their utter strangeness and extremely unlikely environments. »
« Please », the journalist seemed to be saying, « can I go back to talking about cats already and skip over the weird shit? »

So here’s an example of some pleasurable weirdness:

Kliban’s other work has certainly been overshadowed by cats, but at least it gave him financial security… and a life full of cats, drawn and otherwise, which is not that bad a thing.