« America’s top-flight intellectuals will one day hold entire conferences and seminars devoted to Sylviology. They will deconstruct her frame by frame with straight edge and compass, attempting to identify each tiny object as an Artifact of Our Time and a clue to our condition. They will bring in leading neurologists, phrenologists and psychoanalysts to study the blabbermouth pets, the thimble-sized martinis, the neurotic superheroes, to answer the inescapable question: What kind of a mind…? » \from the introduction to Planet Sylvia by Barbara Ehrenreich|

Many years ago, I was perching on a sofa in the corner of a cozy records store (the excellent Death of Vinyl in Montreal, in case anyone is wondering) when I noticed a stack of comics in a nearby bin. Something dishevelled and coverless, pages barely holding together, attracted my attention with its idiosyncratic drawing style and strangely articulated cats. There was also a big-nosed lady with giant earrings and a typewriter. I was hooked and purchased the book immediately, though I wasn’t even sure whether it was for sale or just placed there as reading material. (I located the cover, after all, albeit in a different bin.)

The book was The Whole Enchilada (A Spicy Collection of Sylvia’s Best) by Nicole Hollander, and as it turned out, it the best introduction to her world. (You can purchase it for $1.99 or so on Amazon. I highly recommend it.)

Sylvia is a more-than-slightly cantankerous woman with a wonderfully acerbic sense of humour. Sometimes she doles out social commentary from the bathtub, sometimes a local café serves as her headquarters — or she stays in her living room, dispensing wisecracks at yet another inane TV ad, or bestows advice to lost souls (typed on an honest-to-god typewriter). She’s clearly a feminist, and equally clearly fluent with clichés of womanhood, such a certain obsession with dieting and a definite obsession with cats. She embodies many tropes – she’s the crazy cat lady, an Apron Matron (albeit with a flowery hat instead of an apron), a Dear Abby-type adviser – and puts her peculiar tilt on them all. Extravagant earrings and the odd flamboyant hat (all the articles about Sylvia seem to overstate the presence of hats, yet Sylvia’s handsome head often boasts nought but big hair adorned with a hairnet or bow) are just the cherry on the cake.

As for Nicole Hollander, she is a Chicago native and brought forth something like 30 years of Sylvia. Born as a series of cartoons for the feminist magazine The Spokeswoman, it was syndicated in 1981 and continued until March 26th, 2012, upon which date Hollander declared that Sylvia was retiring. 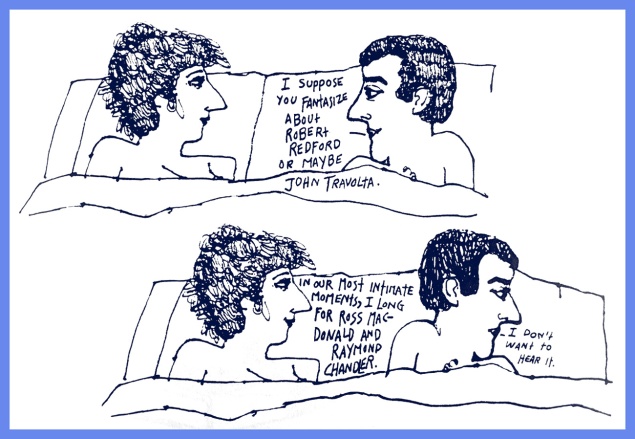 « In the old days, the disconcerting feel of the strip as well as Sylvia’s middle-aged ‘dame’ image and her biting humour gave the artist problems. After St. Martin’s had started publishing Sylvia, even the big syndicates were forced to sit up and take note of her. But they did so in a grudging, good-old-boy sort of way, taking away with one hand what they gave with the other. After Field Enterprises took Hollander on in 1981, a rep would intermittently call Nicole to shake a finger at her – for instance, the week on Sylvia cartoon mentioned hemorrhoids, and another mentioned Lightday pantyliners. “They said, It’s your life, but you’re ruining it. If you leave stuff like this in, a lot of papers will pull the strip. I gave up the hemorrhoids, but not the Lightdays. There was this voice in my head that said, You must take a stand. So I said, I will take my stand for Lightdays, and threw hemorrhoids to the dogs.”» |From Don’t Throw That Old Diaphragm Away! by Ellen Cantarow, published in Mother Jones (June/July 1987)|

In case you’re wondering what *can* you do with a diaphragm, this handy illustration might help: 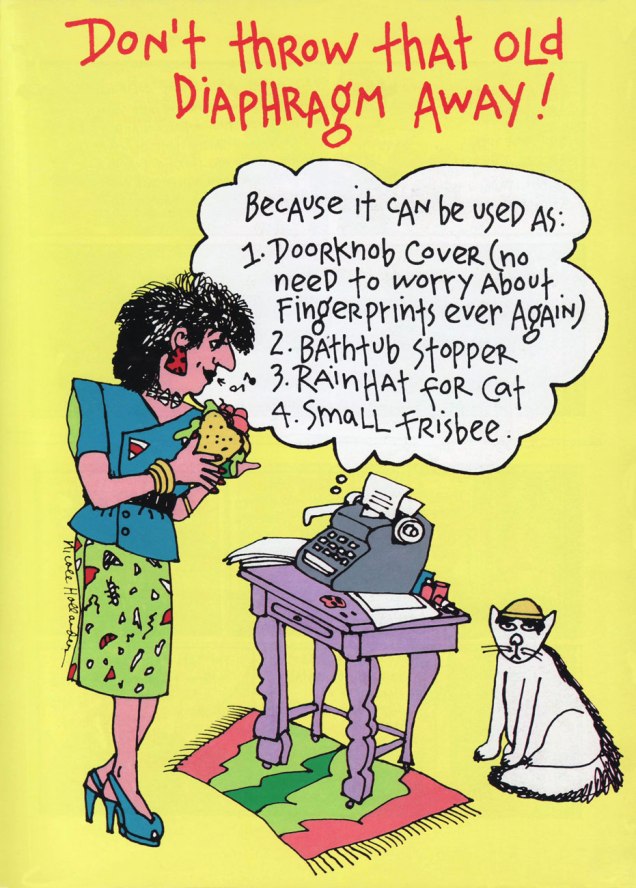 For all its popularity, there aren’t a lot of Sylvia strips available online, let alone in decent resolution. Oh, sure, you can go to GoComics and read a whole bunch of them, but that seems to be just the strips from the 2000s. Somebody got started on a documentary about Hollander in 2015, but I get the impression that that was abandoned somewhere along the way, probably for lack of funds. Even Hollander’s website, Bad Girl Chats, doesn’t seem to exist anymore. Speaking of that, please watch this adorable video in which Nicole explains what sort of things she posts on her website.

(On the brighter side, in 2018, Fantagraphics released Hollander’s autobiography-slash-graphic-novel, We Ate Wonder Bread.) I aim to remedy this situation at least a little bit, by showcasing some of my favourite strips (scanned from The Whole Enchilada, 1986 and also from Planet Sylvia, 1990; the black and white strips were “colourized” by co-admin RG, who abhors lousy greying paper.) 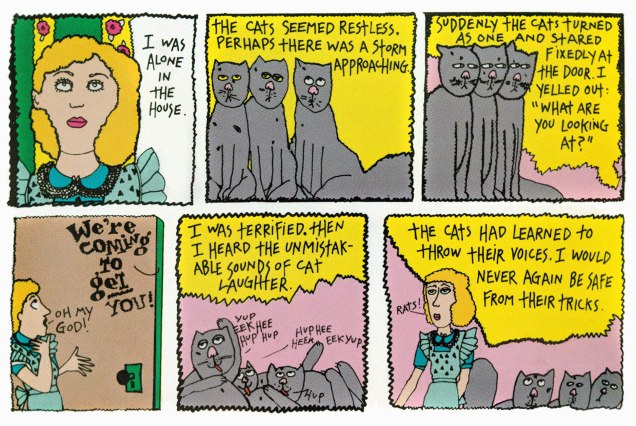 « When we sat down Hollander began talking about how she and her friends used to sit silent and wide-eared at a table in the deli while their mothers gabbed. I didn’t appreciate how vital a memory this is until I opened Wonder Bread and spotted a sketch of the women yakking, another of young Nicole sitting primly before a corned beef sandwich and a jar of dill pickles as the grownups dish. “We were avid listeners,” says the text, filling in details you sense from the art, “fearful of interfering with their talk, hoping they wouldn’t notice us so they would keep on talking. They were all witty women, fiercely loyal to their friendship, to the specialness of every woman in the group.”» |Life After Sylvia: Cartoonist Nicole Hollander publishes a memoir|

One last tidbit: on 2012, Nicole Hollander’s “unique collection of condom packages and sex toys” entered the collection of the Kinsey Institute for Research in Sex, Gender, and Reproduction. That raises more questions than it answers, doesn’t it?