The first helmets were used by Assyrian soldiers in 900 B.C., and they were made of thick leather and bronze to protect the head from blunt objects, swords and arrows during combat. Research shows that helmets can significantly reduce the severity of injuries sustained from head trauma. That’s why it’s so important to always wear a helmet when taking part in a potentially dangerous activity.

You may argue that helmets are just a way to be able to breath underwater, a compromise between the bulky scaphandre (less elegantly ‘diving suit’ in English) and the scuba diving mask. Breathing, ha, that’s just a distraction to the real purpose of a helmet during an octopus encounter: it makes the diver’s head look a little like an octopus’ head, thus confusing him and giving a much necessary advantage.

Install yourself comfortably following the example of this happy family of cephalopods, and let’s have a look…

Out first helmet of the day is a reasonable imitation of a diving suit! The following page is from Prisoner of the Undersea World!, scripted by Gardner Fox, illustrated by Sid Greene, and published in Strange Adventures no. 155 (August 1963, DC).

I am pleased to report that not only did the octopus come out of that encounter in one piece, no frog denizens were seriously harmed, either (which makes this tale pretty special, since human heroes tend to go and annihilate anything they don’t understand).

Our second is a helmeted beauty (albeit twisting in a way that isn’t anatomically feasible) and some of her teammates from U.N.D.E.R.S.E.A. (or United Nations Department of Experiment and Research Systems Established at Atlantis).

The cover story is rife with tentacles, but unfortunately doesn’t feature the scene depicted above at all.

On the other hand, Buried Under the Sea, a fun read nicely illustrated by Mike Sekowsky on pencils and Joe Giella and Frank Giacoia on inks, has plenty of sea-helmets… but no cephalopods. One can’t have everything, alas!

From helmets that are actually connecting to some diving equipment and oxygen canisters, we move on to ones which are just like an upside-down fish bowl somehow magically sitting on the wearer’s shoulders. Style always takes priority over silly things like actually being able to breathe. For more Adam Strange, scoot over to Tentacle Tuesday: Tangles with Adam Strange!

Speaking of Mystery in Space, no. 21 (August-September 1954) has a very appropriate story… proving that the ol’ anti-cephalopod helmet can be used out of water. This is a page from Interplanetary Merry-Go-Round, scripted by Otto Binder and illustrated by Sy Barry… who’s still with us and about to celebrate his 93rd birthday!

« The menacing tentacles came probing down out of the sky in a fantastic quest for the secret of life! »

To celebrate Tentacle Tuesday, I’ve planned a visit to the mysterious planet Rann, as seen through the eyes of Adam Strange, that intrepid, quick-witted, teleporting archeologist. (First, a little context: Adam Strange was created by Julius Schwartz, with a costume designed by Murphy Anderson. He first appeared in Showcase #17 (November 1958). At first, Gardner Fox’s scripts were penciled by Mike Sekowsky, but this task was assigned to Carmine Infantino once the character moved to Mystery in Space, with Murphy Anderson inking most of the stories. As much as I like the Infantino + Anderson team, today’s contributions mostly involve other inkers.)

That green thing? That’s Yggardis, a sentient planet that (who?) craves companionship. Here’s its highfalutin explanation, in that pompous English that Enemies of Mankind use when detailing their raison d’être to their victims: “For uncounted centuries, I have roamed the universe, raiding other worlds for their life-forms, lifting them in my tentacles! Unfortunately no form of living thing which I stole from other planets could live on me more than 24 hours!” The solution to that is (obviously) to steal even more animals for its private, deadly zoo, which is what it proceeds to do on Rann.

Yggardis’ problem is solved when Adam blows it into carefully calculated smithereens, thus separating its radiation-producing mind from the rest of its inert body. A comparison is made to human surgeons removing deadly tissues and organs from an ailing patient. Uh, yes, surgeons regularly use explosives to sever their patients’ brains from their bodies, thus eliminating the need for expensive medication and such.

The Mechanimen are anthropoid robots hellbent on protecting humans on Rann, destroying all their weapons on the principle that “weapons breed mistrust! mistrust breeds wars!” When the Mechanimen, while attempting to repel a sneak attack by some hostile aliens, run out of power (they “mechanically never gave a thought to renewing their power” – what?), Adam has to save the day, much like he has to avert disaster every time he sets foot on Rann. How did Rannians ever survive without him around?

As you’ve probably noticed, Adam Strange stories tend to have gonzo plots. I *like* goofy stories, but these leave me frustrated: they’re far too far-fetched to make any kind of sense, yet they’re not wacky enough to be properly entertaining. The stories toss around “futuristic” terms like sky-radiation and zeta-beams and altered molecular structures, and provide “scientific” explanations that are supposed to make the plot plausible, except that the plot’s still ridiculous, all the more so after these attempts to shoehorn logic into it. It wouldn’t be so bad if Strange wasn’t over-explaining everything – he’s like your best friend’s pedantic dad, droning on about something while everyone feigns interest, sucking out the joy from topics that would otherwise be fascinating.

The other interesting aspect of Adam Strange is the sexual tension – basically, Adam’s zeta-beam wears off every time he and Alanna share an embrace. (That sends him back to Earth until he catches the next beam and gets teleported back to Rann.) That’s an original way of keeping them apart, I have to admit. 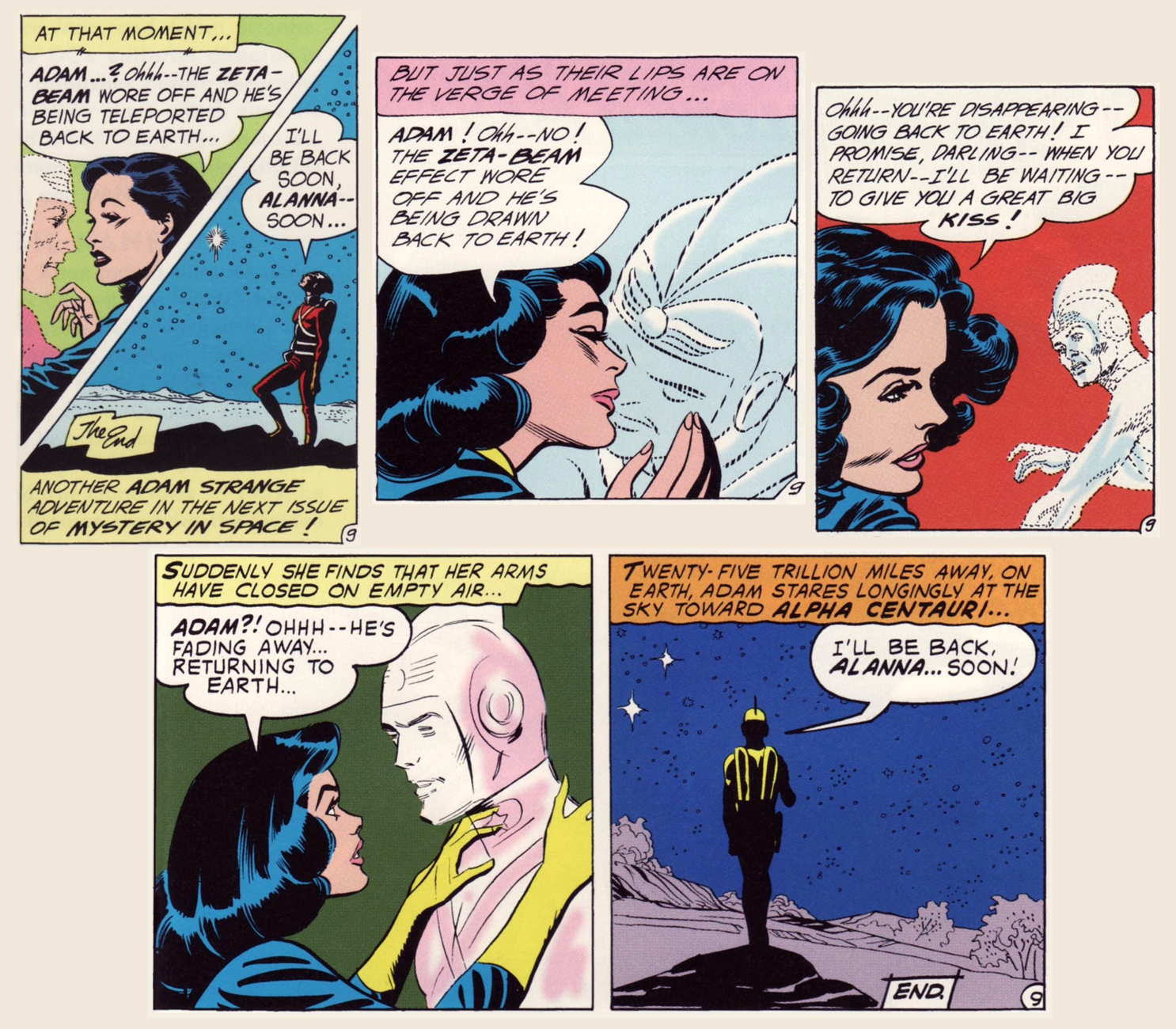 He’ll be back soon, he says – as will I, with another Tentacle Tuesday.