Created by Bill Everett, Namor the Sub-Mariner first appeared in Marvel Comics no. 1 (October 1939). The offspring of a human sea captain and a princess of Atlantis (and thus proudly bearing the title of Prince), he possessed the aquatic talents one expects of a regular merman and the exceptional strength of a carnival strongman. The cool thing about Namor is that right off the bat, he was a rather negative character – to be more precise, he was an Enemy of the United States (Everett didn’t mince words or characters, huh?) As Les Daniels states in his Marvel: Five Fabulous Decades of the World’s Greatest Comics (1991), « Namor was a freak in the service of chaos. Although the Sub-Mariner acted like a villain, his cause had some justice, and readers reveled in his assaults on civilization. His enthusiastic fans weren’t offended by the carnage he created as he wrecked everything from ships to skyscrapers. » This chaos culminated in an epic fight with Human Torch in 1941 when Namor took things a little too far and threatened to inundate the whole island of Manhattan. This little skirmish didn’t prevent him from joining the Allies’ side once World War II started, however, which gave a more constructive outlet for his somewhat destructive energies.

Right from the beginning, the Sub-Mariner was a complex character who just wouldn’t fit into the standard good guy/bad guy dichotomy. He underwent through quite a few transformations, disappearing for a bit right after WWII like many of his super-and-anti hero compatriots (but never for more than a couple of years at a time) and resurfacing during the Silver Age as a slightly different character. Namor’s concern about encroaching technology and hate of humanity, his fierce independence, made him a likeable character for those of us who like mavericks. He is a tragic character, a king without a kingdom who finds that Atlantis and its people have been destroyed by nuclear testing. After that, who wouldn’t hold a grudge? Anyway, if you’d like a more cogent overview of the Sub-Mariner’s history, visit The Great Comic Book Heroes.

To get back on topic, given how much time Namor spends underwater, it’s hardly surprising that he quite frequently encounters tentacles.

First, a story scripted and drawn by Bill Everett – who better to introduce the character than his creator? This is “The Octopus-Men!”, printed in The Human Torch no. 38 (August 1954). 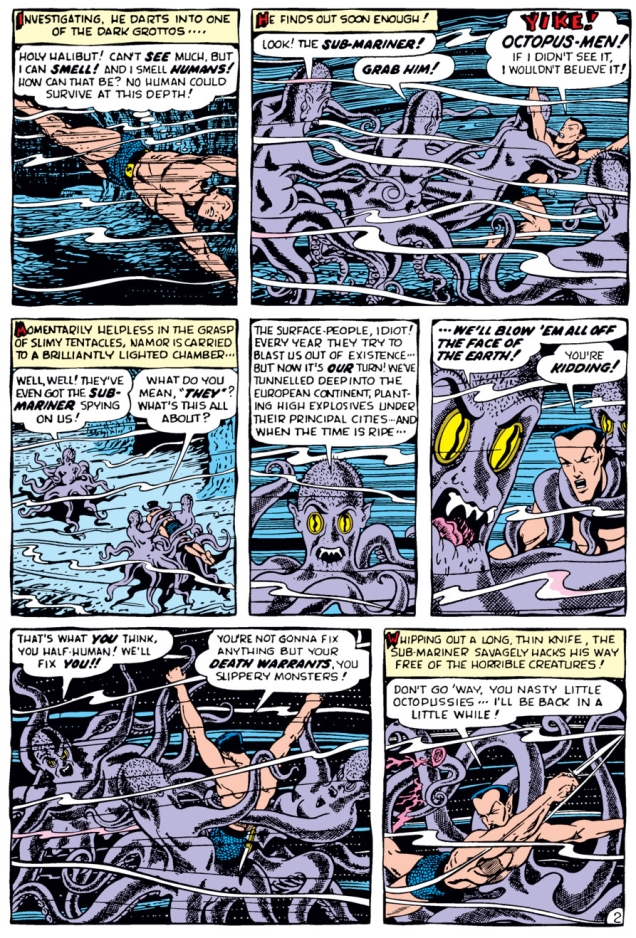 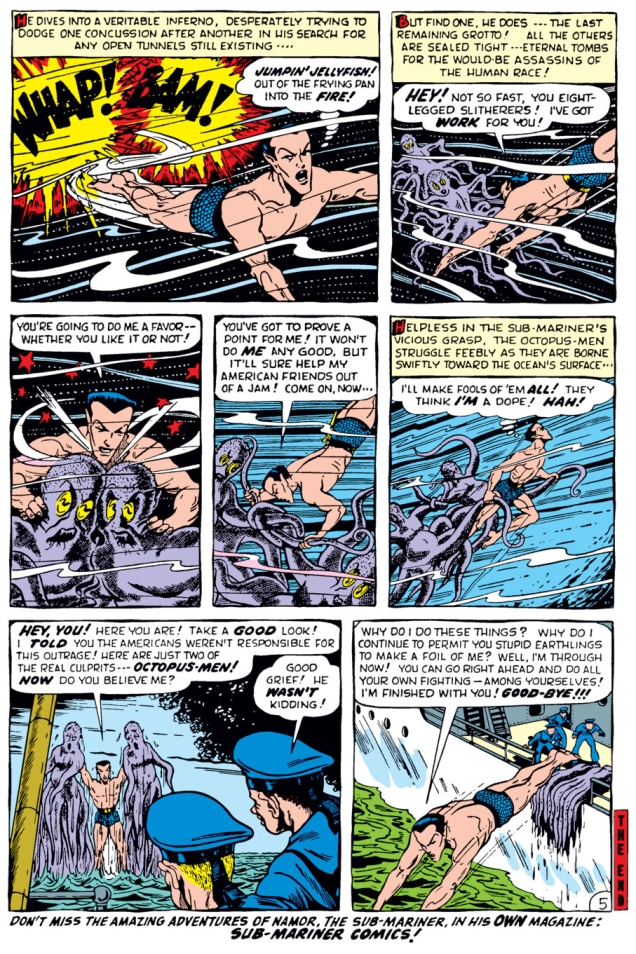 Skipping ahead some twenty years, a page from “Namor Agonistes!”, scripted by Roy Thomas, pencilled by Ross Andru and inked by John Severin, printed in Sub-Mariner no. 38 (June 1971). This is sort of an origin story of the Sub-Mariner. Lovely art, n’est-ce pas?

A page from “When Wakes the Kraken!”, scripted by Roy Thomas, pencilled by Sal Buscema and inked by Mike Esposito, printed in Sub-Mariner no. 27 (July 1970): 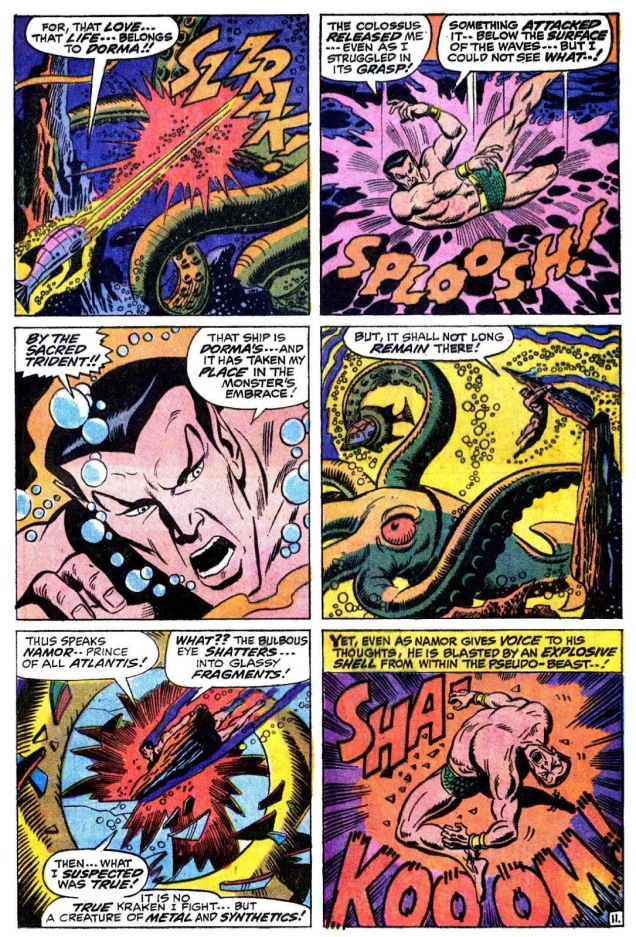 Oh, let’s have a couple of covers, too.

I mostly sneer at modern “reboots” of Golden or Silver Age characters, but Namor’s appearance in the excellent Thor the Mighty Avenger (Marvel, 2010) was completely à propos. (The series is a happy union of an absorbing story with great graphics – it’s written by Roger Langridge with art by Chris Samnee.) Here’s a page from “Thursday Morning“, published in Thor the Mighty Avenger no. 5 (December 2010). 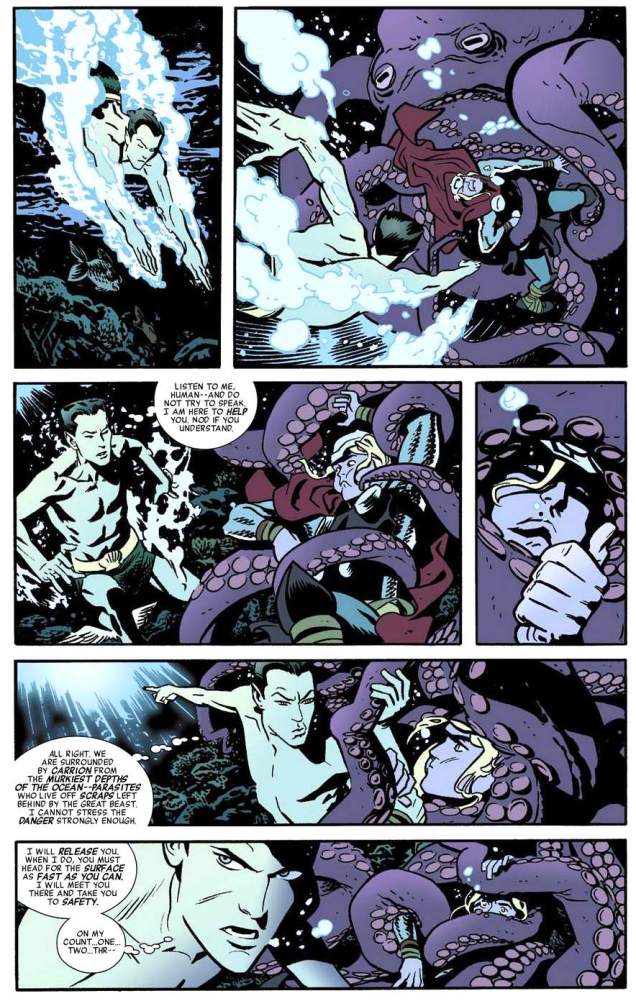