Since the 1980s, when it came to carrying the torch of Good Duck Man supreme Carl Barks, there have been three clear contenders, namely Daan Jippes, Don Rosa and William Van Horn. All three are outstanding talents, and honestly, no single being can take the place of Barks. In the end, Van Horn is my pick, because he’s the most complete package*, possessing his own lively, economical style in both writing and drawing (and that includes his expressive lettering, a perennially underrated art form). His work is just a pure joy to read, while Jippes is arguably too close to the model and Rosa’s stories sometimes feel like continuity-saddled homework. Van Horn is a natural.

On the occasion of Mr. Van Horn’s eightieth birthday (he was born on February 15, 1939, and is thankfully still with us), here’s a modest Van Horn comics sampler, opening with his first comics series after decades of work in animation and children’s books, Nervous Rex, and continuing into his work for Danish Disney comics packager Egmont**. 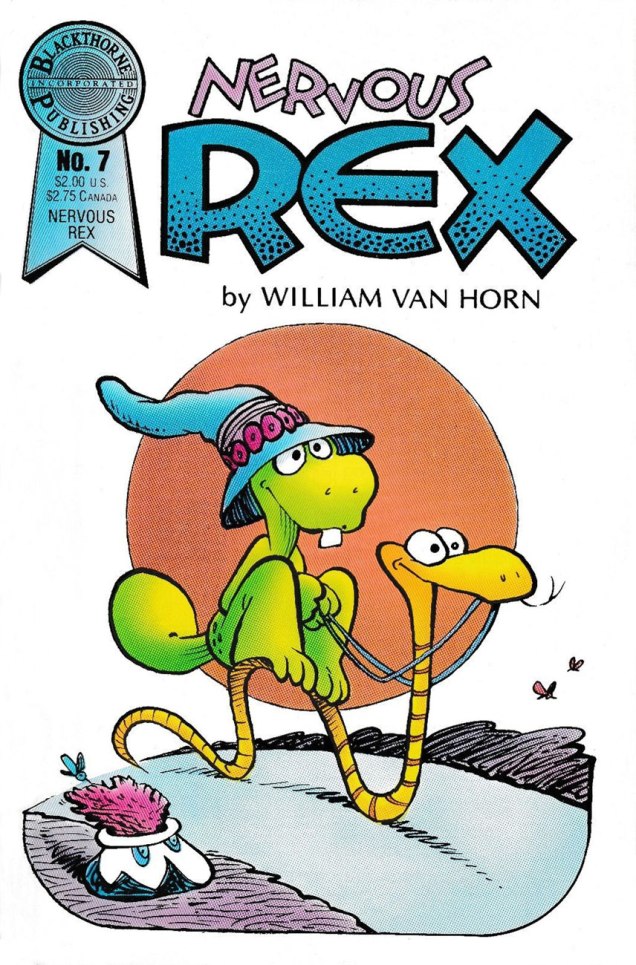 A most joyous 80th anniversary to you, Mr. Van Horn! Fittingly, I leave the last word to our humble birthday boy: « Let’s create our own classics if we can… but heaven help us if we think we’re doing that. We should follow Barks’ lead and regard these stories as something to pay the rent and buy the pot roast. »

**speaking of Egmont, this sobering note from Van Horn, from a brief interview conducted by John Iatrou in 2010: « Disney comic books in North America have been virtually a dead issue (no pun intended) for over a decade, possibly two. Sales here hover around 4000 copies a month! This on a continent of over 350 million people! Egmont has never tried to publish here. They thought about it years ago and decided it wasn’t worth the effort. » So there you have it. Van Horn and Don Rosa have been producing their ducks for the European market, to be then reprinted, with piddling print runs, in North America. Nul n’est prophète en son pays… On the other hand, if you’ll forgive me for saying so, most European Disney comics are utter garbage, and have been for decades. If you like endless arrays of Donald as a superhero, Donald as Michael Jackson or Indiana Jones, Rappin’ Donald… you’ll be in hog heaven. “Opera Mundi crap“, we used to call it.

2 thoughts on “The Unassuming Brilliance of William Van Horn”