*That’s Not Safe For Work, for those unfamiliar with the acronym. Turn back while you still can!

Our first example of WTF is this cover, drawn by good ol’ William Stout.

« One of the great series in underground history, Denis Kitchen’s Bizarre Sex was launched in May, 1972. One could discern that this would be a “no-holds-barred” type of publication upon perusing the first issue, as the first two stories were about brother/sister incest and interracial homosexuality. Bizarre Sex became best known for issue #9, which introduced Omaha the Cat Dancer with a story that took up the whole book. After another appearance in Bizarre Sex #10, Omaha moved on to its own successful serial. The great thing about Bizarre Sex is the series matured through the years, evolving from a comic book about atypical sex into more of an in-depth review of sexual relations and the human condition. »

As this is no. 10, the last issue of Bizarre Sex, presumably that “in-depth review of the human condition” part is applicable here. The cover could have fooled me… If anyone out there has read it, do let me know!

Chester Brown has always been one sick puppy. If by now his work is creepy and boring, back in the earlier days of his career, his stories were often fascinating… for those of us who enjoy a good mindfuck and have a strong stomach, that is. As for me, I never liked his stuff: far too disturbing, in a viscerally-uncomfortable kind of way. A good demonstration of his typical sense of humour is the following 2-pager with a characteristic blend of onanism, body fluids and irony. This instalment of Adventures in Science was published in Yummy Fur no. 4 (1984). 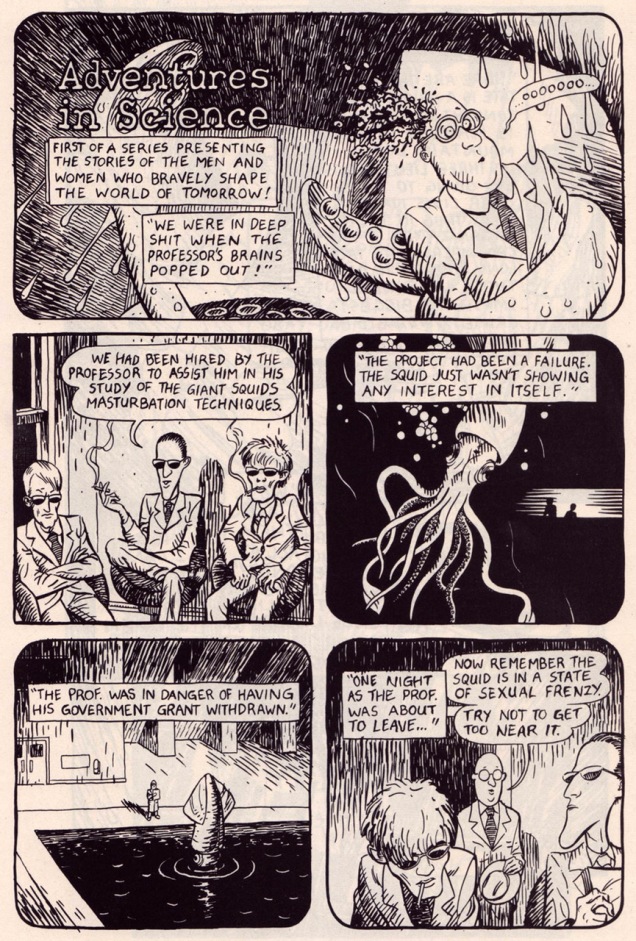 A little bit of comic relief: a cartoon from “How the Animals Do It” by Larry Feign. Make sure to visit this page for a little video preview of this book: a little animated tale of the barnacle’s super long penis and what s/he does with it, including the brilliant quote « if no resistance is met, in it goes ».

Okay, I’ll bite. Why did the chicken cross the road? Why did the male octopus lose an arm due to sexual promiscuity?

« Male octopuses have a big problem: female octopuses. Each male wants to mate and pass on his genes to a new generation. The trouble is, the female is often larger and hungrier than he is, so there is a constant risk that, instead of mating, the female will strangle him and eat him. The males have a host of tricks to survive the mating process. Some of them can quite literally mate at arm’s length. Others sneak into a female’s den disguised as another gal, or sacrifice their entire mating arm to the female and then make a hasty retreat. » [source: Mystery of Cannibal Octopus Sex ]

Next time we encounter difficulties with our romantic entanglements, let’s remember not to complain.

Our last entry is a little more standard from the perspective of shokushu goukan. The blend of sex-and-religion is also nothing new, although some people seem to be labouring under the impression that it still has some sort of shock value in this day and age (My sleazy ex-boss from the framing store, I’m looking at you.) However, I think these scaly tentacle-penises are a reasonably original take on the theme, and I also like the choreographed sisters, who seem to be doing some sort of interpretative dance while a-waiting to be ravaged.

You can read the whole thing here – very NSFW, obviously.

3 thoughts on “Tentacle Tuesday: the Creepy and the Bizarre (NSFW* Edition)”