I recently stumbled upon a comic story that I really liked, posted on one of those websites of dubious legality bestrewed with ads. Oh, the plot didn’t make all that much sense, nor was it original… but I liked the art, bright and stylish. Lorna, the heroine, was drawn a bit like a fashion sketch from the 80s: big hair, blue eyeshadow, lots of leather and studs wrapped haphazardly over her sumptuous form.

I’m late to the party, for Spanish artist Alfonso Azpiri (1947-2017) has been around for a while. He was a frequent contributor to Heavy Metal Magazine – which explains why I haven’t come across his art before. I’ve never read it; I also haven’t seen the magazine-inspired movie Heavy Metal (from 1981), nor its follow-up, Heavy Metal 2000 (2000). My first glimpse of an exposure, oddly enough, to “the world’s greatest illustrated magazine” came by way of the video-game Heavy Metal: F.A.K.K. 2 (also from 2000), which I adored at the time, and have played several times. I’ve of course seen second-hand copies of the magazine lying around comic book stores, but they never seem interesting enough to pick up.

To get back to the topic at hand, Lorna is Azpiri’s most enduring character. She’s been compared to Barbarella, though I believe Jean-Claude Forest’s heroïne was a much more original and fresh creation. Still, Lorna has redeeming features, aside from the fact that it’s fun to follow the adventures of an almost-always naked buxom blonde with an attitude.

What I like about Lorna is her resilience – her enjoyment of trysts with animal, mineral and vegetal never stop her from looking for a way out and turning the tables on her various captors at the first opportunity. And speaking of doing squat thrusts in the cucumber patch, Lorna gets it on with everybody, independently of their species, origin, or chemical composition, organic or inorganic. I fail to see why a sack-like creature from another planet, a giant crustacean or a beetle-sized lizard would want to get it on with a human female, but oh, they do. A lot of stories from other authors balk at such unholy pairings*, setting them up only to have the damsel rescued at the last second, but Lorna is usually her own guardian angel, managing to escape…. after properly enjoying herself.

*Although Italian artist Paolo Serpieri‘s Druuna (also from Heavy Metal Magazine) comes to mind – she also gets assaulted by all manner of yucky things, but where Lorna has colourful fun, Druuna is getting painfully raped, so I by far prefer Lorna’s adventures.

So here are the adventures Lorna had with tentacles. If you want more Azpiri, this art portfolio is a good place to start; and if you want to sample Lorna’s adventures, you can read pretty much all of this stuff online here.

The following pages are from Lorna: Lost Shadows (2006). The original title is Sombras perdidas (2005). Both were published in Heavy Metal Magazine. 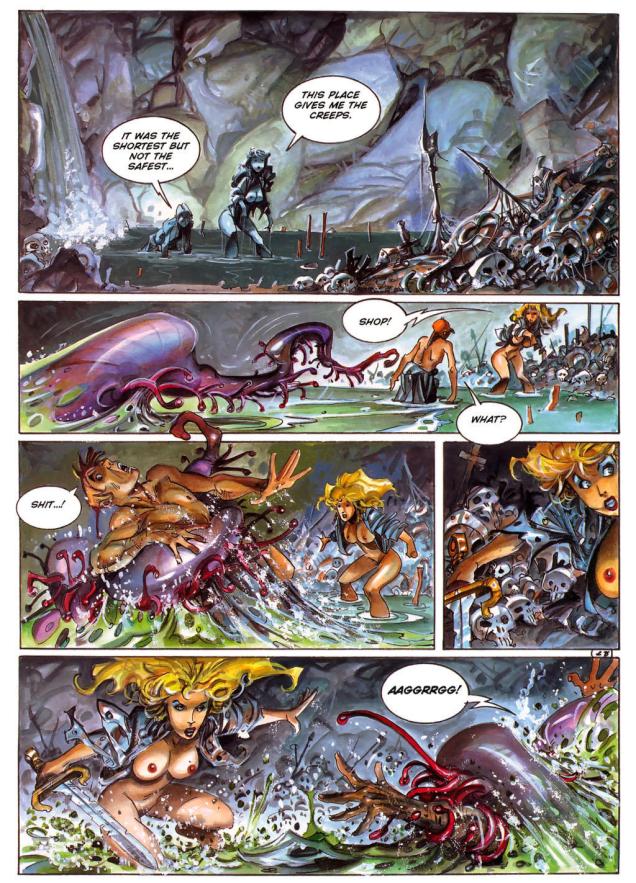 The following is from The Eye of Dart-An-Gor (2005). In Spanish, this came out as Ojo de Dart-An-Gor in 2003. Both were published by Heavy Metal. 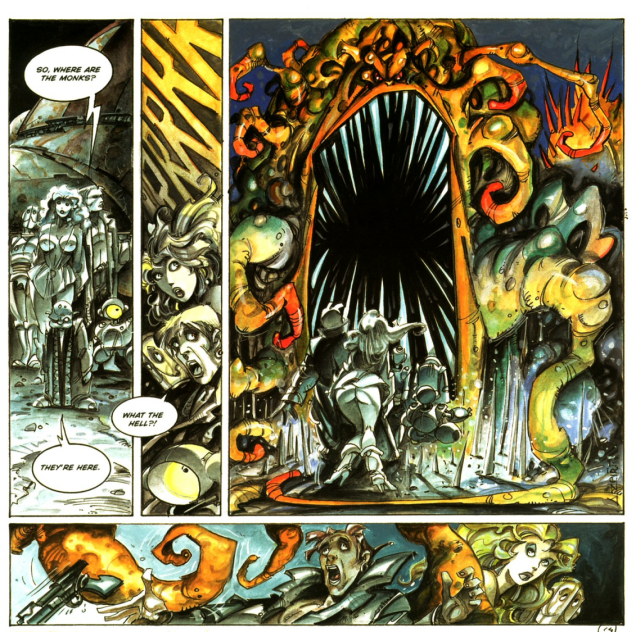 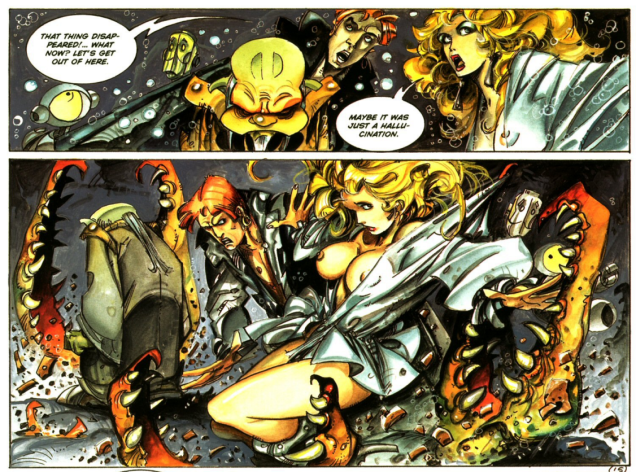 Two following page-and-a-half is from Lorna and Her Robot (2000). The original title was Lorna y su robot (1999). Both were published by Heavy Metal. I prefer Azpiri’s later style.