« Once you’ve lived the inside-out world of espionage, you never shed it. It’s a mentality, a double standard of existence. » — John le Carré (1931-)

I’ve always had a soft spot for writer-editor George Kashdan (1928 – 2006). While he wasn’t what you’d term an outstanding writer, he was the most consistent bright spot of DC’s mystery books in the late ’60 to early ’80s. As opposed to the other workhorses in the stable, one still found trace amounts of passion and personal quirks in his work. His recurring themes for simply more fun than his colleagues’: he loved Sinister gentlemen’s clubs, wild conspiracies, strange carnivals, pre-ordained, thematically-twisted deaths (think of those Final Destination movies)…

In a thoughtful obituary, Mark Evanier tells us: « In 1968, as part of a program of editorial restructuring, Kashdan was let go by DC. Several people who worked with him said it was because he was “too nice” and had occasionally clashed with management in arguing that freelancers should be paid and treated better. » Ah, another victim of the anti-union purge of ’68*. 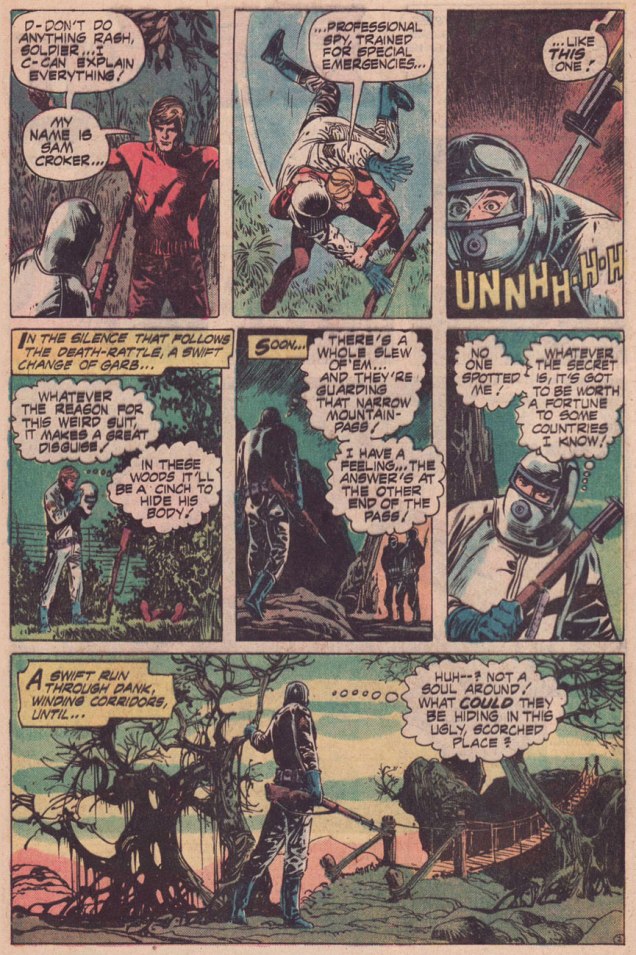 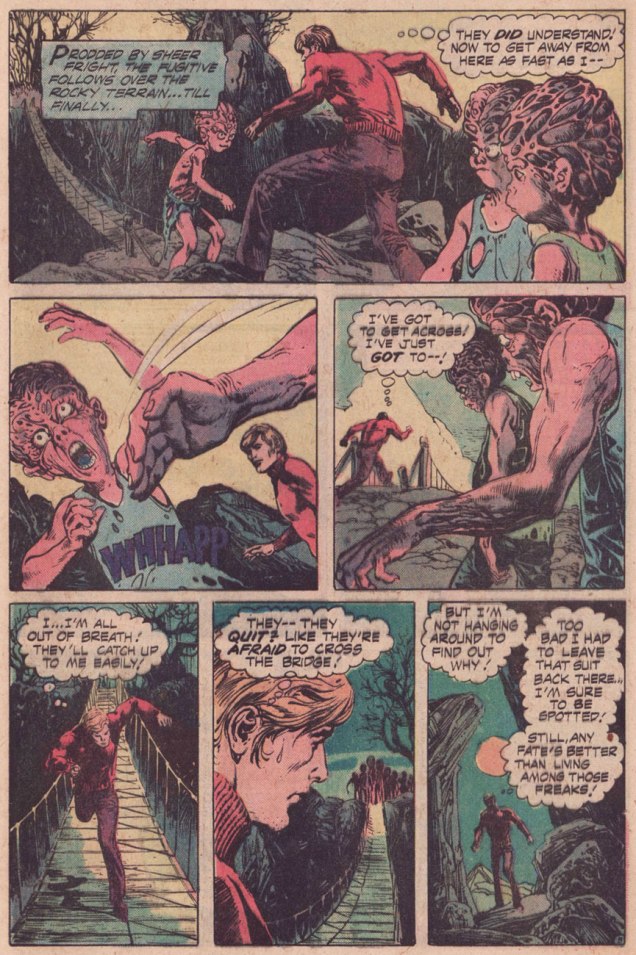 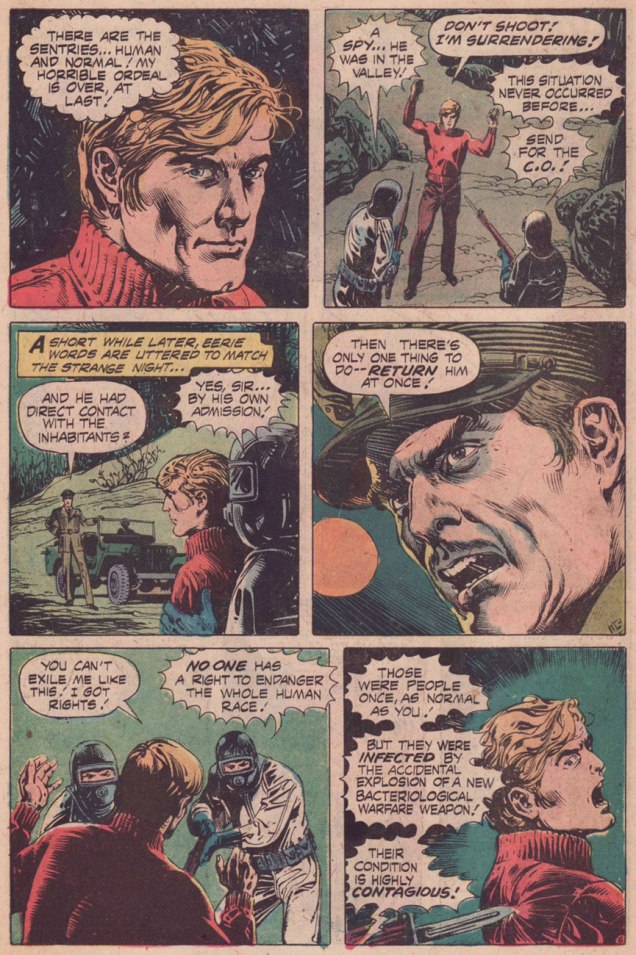 No-one comes off particularly well in this one, really: Croker the spy is an impenitent, petulant slime bucket right to the finish, and the military, for their part, have been conducting sloppy biochemical experiments… for purely defensive purposes, I’m sure.

While the Geneva Protocol has prohibited the use of such barbaric means of warfare since 1925, the US didn’t sign on until… 1975, just before the fall of Saigon, marking the end of the Vietnam War. Let’s not ever forget the US Armed Forces’ generous and indiscriminate dispersion of Napalm and Agent Orange upon troops and civilians during the course of that conflict.

Given the timing, perhaps that bit of news inspired Kashdan to pen this sour little parable.

The guard’s high moral stance, « No one has the right to endanger the whole human race! » may ring a bit hollow and ironic given the circumstances, but he’s still right.

On a smaller, but no less tragic scale, consider the real-life story of what happened when a fan broke quarantine to catch a public appearance of her idol, actress Gene Tierney.

One simply can’t afford to mess around when it comes to quarantines and contagion.

Incidentally, Alcala really seemed to have a yen for those flay-headed mutants of his. To wit, here’s the opening page of The Children of the Bomb, Part 5, from Planet of the Apes no. 10 (July 1975, Marvel), written by Doug Moench and illustrated by Alcala. 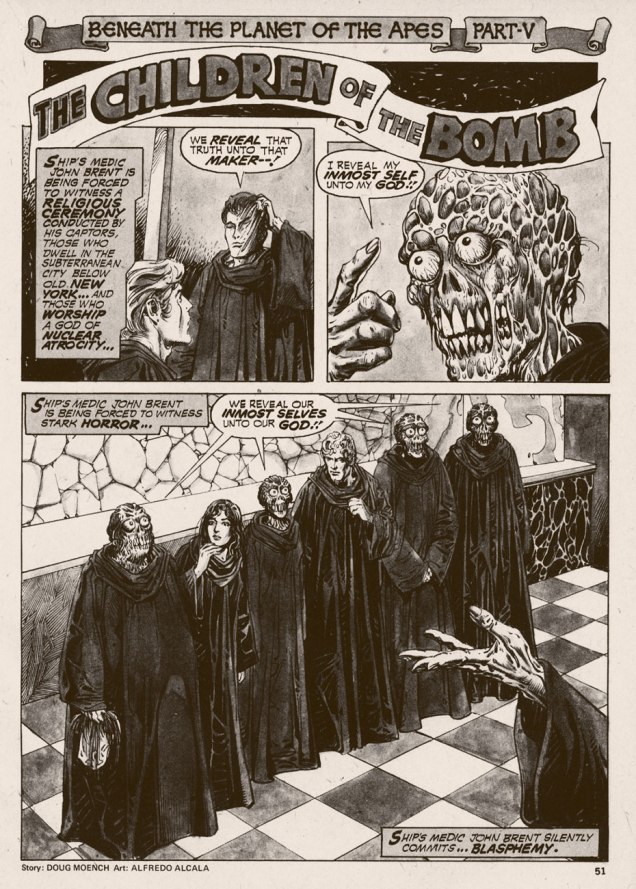 * « [In 1968] Fox had joined other comics writers like Otto Binder, John Broome, Arnold Drake, Bill Finger and Bob Haney, signing a petition to ask DC for more financial benefits, particularly regarding health insurance. Since the company regarded writers as expendable people they were all fired without mercy and replaced by more obedient newcomers. » [ source ]