Today’s installment of Tentacle Tuesday provides us with another healthy dose of tentacles of a vegetal nature. With my co-admin RG’s blessing, I decided to be a little unorthodox and instead of my usual piecemeal approach, share one single story.

I must admit to having no rapport whatsoever with Star Trek – I did not watch the show as a child (or as an adult), and haven’t even managed to pick up characters, plot lines or cultural references from the surrounding atmosphere, aside from the stuff *everybody* knows.

But The Planet of No Return (published in Star Trek no. 1 (October 1967, Gold Key), scripted by Dick Wood and illustrated by Nevio Zeccara) is a delight for any keen child who’s ever been mesmerized by the notion of a carnivorous plant and has carried that love through the years into adulthood. I’ll hold my hand up there! It’s also right in the sweet spot of a Venn diagram, the riveting intersection of  “interested in Venus flytrap plants” and “fascinated with tentacles”. I’m not featuring the full story (you can read it here), preferring to tantalize my audience with the many tentacle-laden panels of grabby, aggressive human-devouring plants.

Incidentally, “cannibal plant” is a misnomer (shame on you, Pavel Chekov!) – cannibals involve individuals consuming individuals of the same species. 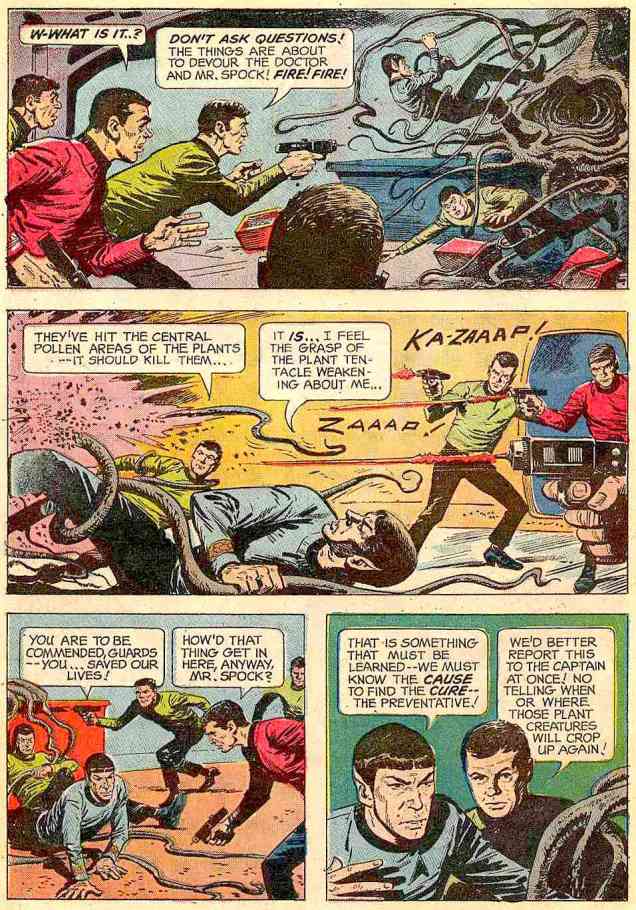 The ship gets teleported to the planet to pursue their original exploration mission as planned… and get almost eaten by a tentacled “cannibal” (once again, not actually a cannibal) plant. A “giant plant tree”, strangely mobile, saves them from this worse-than-death fate… and turns out to have been Hunt, one of their teammates transformed into plant life by spores. No, I don’t know who Hunt is, either – he’s certainly not on the official Star Trek character list, introduced seemingly to be promptly killed after performing his heroic deed.

The now four-people team (the fifth one, Hunt the tree, dies after his epic battle with the Cannibal Plant) continue further into the wilderness… and stumble across a village of sentient plants, who don’t take kindly to intruders. Geez, can you blame them?

Janice Rand has it coming for being annoying and whiny…

At this point, we’re more or less done with tentacles, but I can’t leave you on this cliffhanger (especially if you don’t have some time to waste reading a comic of questionable taste).

Here’s how it ends:

What does this “bestial plant” want with Janice? It wants to put her into a cattle pen, of course! Aiming to rescue her from its clutches, our intrepid explorers break into the pen, and, observing the landscape, conclude that the plants are raising dinosaur-like creatures who consume vegetable-type plants. «The lower plant life on their social scale are used as fodder… food for the beast creatures! Vegetable food!» Oh, and «The vegetables are alive – they’re making sounds also!» So sentient plants are farming animals whom they feed on other sentient plants. (At this point, I was muttering “what is wrong with this comic?”) It turns out that the superior plants eat the animals, who eat the inferior plants, and Janice is now one of the cattle, about to be sent into the giant trees-cum-slaughter-houses to be transformed into food. During the climax of the story, the slaughterhouse trees are blown to smithereens by Mister Spock and his laser beam destruct ray (it’s automatic, it’s systematic, it’s hydromatic), and everybody is teleported back into the relative safety of the ship. The surface of the planet (a.k.a. “hideous little globe”) is then obliterated by laser beams – just in case.

If you’re craving more bold adventures of a carnivorous/cannibal plant nature, head over to A Child’s Garden of Carnivorous Plants, The Hungry Greenery, or Plants Sometimes Have Tentacles, Too.