The Golden Age of comics proffered quite a lot of anthropomorphic animals to its readers. The stuff on offer ran the gamut of different definitions of humour, from inane slapstick to pleasant goofiness, all the way to batshit surrealism. There’s at least one common streak running through this zoological revelry – tentacles!

Our first exhibit is a charming comic from the 40s. Land of the Lost was a radio series broadcast from 1943 to 1948 on Mutual Broadcasting System and ABC, written, produced and narrated by Isabel Manning Hewson. Each episode started with the line « In that wonderful kingdom at the bottom of the sea… », and presented a new under-the-sea adventure of Isabel and Billy, two kids lucky enough to have an adorable avuncular fish for an underwater guide. (The fish was called Red Lantern, and was most notably voiced by Art Carney.) You can listen to an episode from 1945 here. 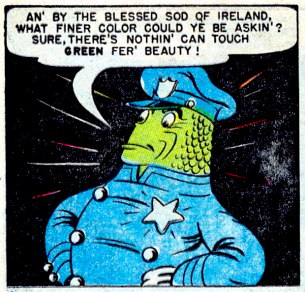 Coming back to our beloved cartoons: in 1946, EC Comics started publishing Land of the Lost Comics, a series that lasted for 9 issues. Hewson remained the writer, and the art was handled by Olive Bailey (not the Olive Bailey who helped crack Germans’ Enigma cipher machine in WWII.) The result was impressive: these comics are delectable, combining beautiful art with inventive plots that may be goofy, but have a solid internal logic. Hewson gave her sea-creatures vibrant personalities, and it’s so much fun to dive (not pun intended) into this world.

The following panels are from “Jack Frost“, scripted by Isabel Manning Hewson and drawn by Olive Bailey, published in Land of the Lost Comics no. 3.

Thank you, cool ladies, for all the fun!

Land of the Lost also became an animated cartoon as part of Famous Production Studios‘ Noveltoon series: Land of the Lost (1948), Land of the Lost Jewels (1950) and Land of Lost Watches (1951). I find the animation to be definitely subpar to the comics or the radio show, but I’ll let you judge for yourselves. (Jack Mercer is in it, albeit briefly!)

Did you know octopuses love to box? This implausible situation is definitely part of the lazy artist’s roster. To wit:

Ha Ha Comics, a sister anthology of Giggle Comics, was published by ACG. (With issue #100, Ha Ha became Teepee Tim, going from animal hijinks to young Indian shenanigans for all of… three issues.) It’s quite a the playground of anything goes, but upon careful inspection, one easily finds good art shining among the dirt-pile of mediocrity, and diverting storytelling among hackneyed yarns.

How many arms does the fellow up above have, nine? I suppose that’s why he’s the champ!

Comic Cavalcade went all funny-animals only with issue 30 (Dec-Jan 1948), when superheroes faded from popularity (oh man, that’s hard to imagine now, isn’t it?) It lasted until 1954, by which time it shrank from its original 96 pages to 76, however retaining its 15-cent cover price.

2 thoughts on “Tentacle Tuesday: Ha-Ha and Coo-Coo With Frolicsome Animals”