« All studies of propaganda tell what a powerful weapon it is; that since armies fight as people think, it is essential to control that thought. This means some form of managing the news, and the only question is the degree to which the news should be managed openly and the degree to which it should be managed subtly. » ― Phillip Knightley, The First Casualty: The War Correspondent as Hero, Propagandist, and Myth-maker from the Crimea to Vietnam

In most collectors’ lives, there’s a degree of more casual, automatic accumulation. Things you pick up for a song, just because the opportunity arises, and that you file away, planning half-heartedly to look them over when you find the time. As a devoted Jerry Grandenetti fan, I always pick up his work… but I favour some genres over others. Mr. G has crafted, for instance, a lot of war comics for DC over the years (1952-1984!), most of which I haven’t seen. For me, it’s always been about his horror/mystery work. So… I had picked up, somewhere along the line, a consecutive pair of issues of DC’s Men of War (26 issues, 1977-80), numbers 9 and 10, featuring the first two parts of a Dateline: Frontline backup sequence, « Bathtub Blues » and « Glory Soldier ». I was very, very impressed.

Now, most of DC’s war books were scripted by a small cadre of authors, namely the indefatigable Robert Kanigher, as well as Bob Haney, Ed Herron, Jack Miller… but mostly Kanigher. In the Seventies, things changed a bit, with solid help and variety coming from Frank Robbins and David Michelinie on The Unknown Soldier, for instance. I had encountered Cary Burkett’s name here and there, being a regular reader of Batman titles The Brave and the Bold and Detective Comics, where he scripted backups (Nemesis, Batgirl) and the occasional lead feature. But this was… different. Hard-hitting, quite free from convention, and damn well buried in the back of a second-tier war book.

I hunted down the rest of the D:F series, and my initial impression did not fade… quite the contrary, indeed. The third serial (MoW 21-23), set on the Russian front, actually brought some tears to my eyes. Why was this feature so little-known? Oh, I know… the usual reasons. But I wanted to find out more, and the next logical step was to reach out to the series’ surviving author, who was happy to oblige, to my delight. And so here we are. The stage is yours, Mr. Burkett.

« Paul Levitz was editor of a new war comic called ‘Men of War‘ featuring a character called ‘Gravedigger’.  He wanted to have backup stories in each issue, and he came up with the title ‘Dateline: Frontline‘ and the idea that it would feature a war correspondent as the main character. I was working as his assistant at the time (1976), and he asked me to do a series of 3 six-page stories.

He pointed me toward a book called ‘The First Casualty‘ by Philip Knightley. The title was inspired by a famous quote ‘The first casualty when war comes, is truth‘.  The book was a history of war correspondents from early days of reporting through the Vietnam War. It became a basis for the new comic series in terms of setting up the inner dilemma of the main character, which was how to report ‘the truth’ in time of war.

I chose to set the series in World War II and named the main character Wayne Clifford. My idea was that he would begin his career as a war correspondent being very idealistic and naïve. Over the series of stories, he would come face to face with wartime situations which challenged his assumptions about news reporting, war, ‘truth’ and about himself.

That, in a nutshell, was the core of the series.  I chose to set the narration in first person, which I guess is pretty much the standard in comics now, but was not common then.

After the first 3 stories, Paul asked me to continue the series. But we kept the idea that the series would be done in groups of 3 related stories.

I did a lot of research to depict true, historic wartime settings which I hoped would show more aspects of war than to just have the hero ‘fight the enemy’ and stop the Führer’s latest grand plan.

Paul had gotten Jerry Grandenetti to be the artist on the series from the very beginning. I admit, when I first heard this, it didn’t thrill me. I was not that familiar with Grandenetti’s work, but I had seen a few stories he had done and had been put off a bit by his strange, exaggerated style.

But when I saw his art for my first DF story, I realized why he was such a respected artist. His expressionistic kind of style emphasized certain qualities that gave a distinctive mood to the story.

But what I felt the most strongly was that Grandenetti understood how to make the story flow. If you could let yourself be drawn into the visual universe he created, it would come alive. The sequences of images he created would merge into one storytelling stream.

I didn’t know at the time that Grandenetti had worked on The Spirit with Will Eisner, but that strong storytelling aspect of his art was what I responded to most when I saw Jerry’s work on my stories.

My Dateline:Frontline stories were done ‘full-script’, meaning I wrote out full panel-by-panel breakdowns for the artist to follow. And I could see how Jerry would take my panel descriptions and make them flow into each other. If I was going for a specific kind of pace or mood with a sequence, Jerry immediately knew what I was after, and knew how to emphasize it visually.

I worked with very few artists who had Jerry’s instinctive grasp of this and his skill for executing it. » 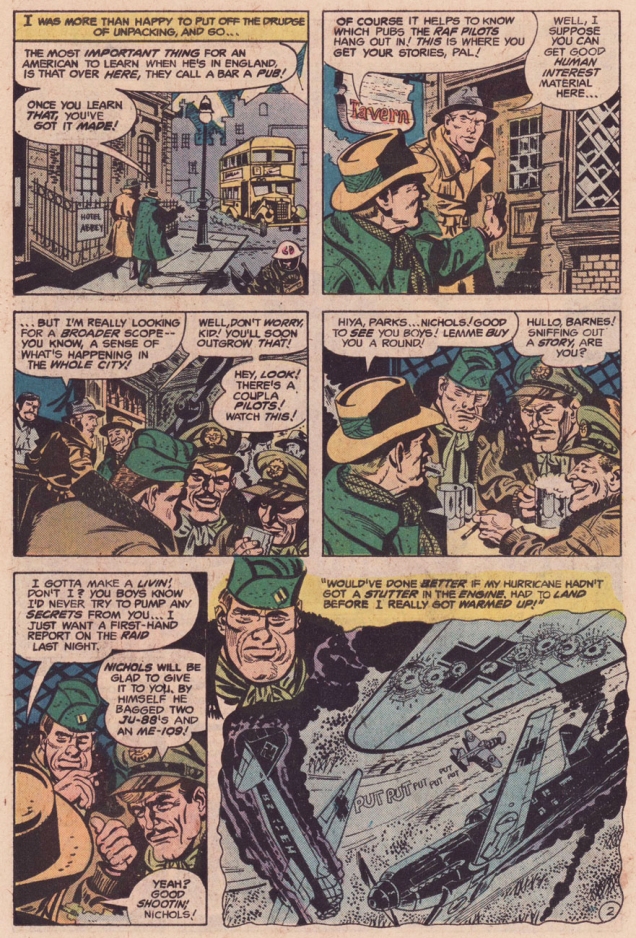 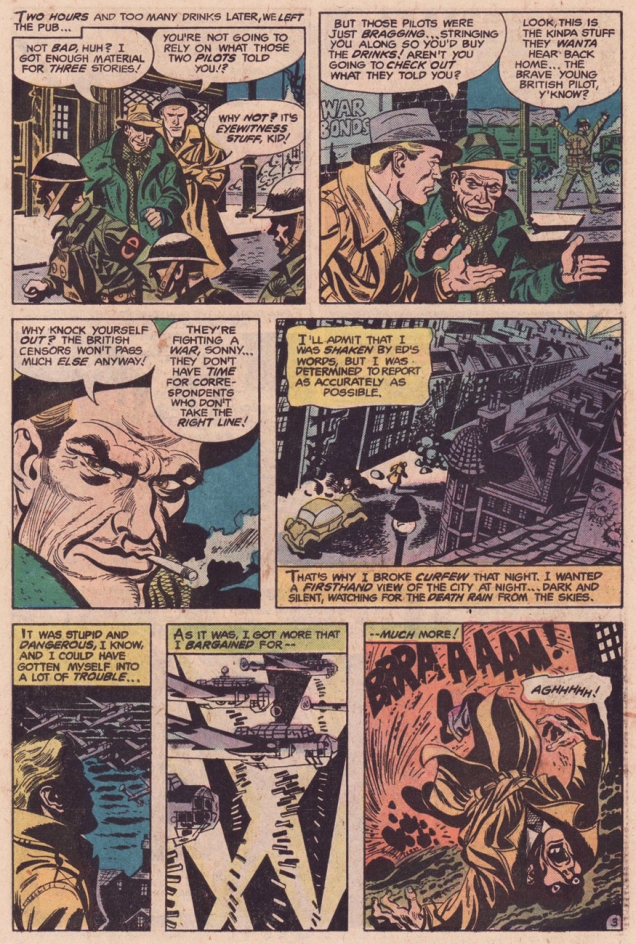 Each Dateline: Frontline episode was conceived to stand on its own, but be part of a larger trilogy. This London entry, the series’ introduction, appeared in Men of War No. 4 (Jan. 1978). In part two of our talk with Cary Burkett, we’ll feature the second London chapter, « Human Interest Story » and our guest will generously answer some of WOT’s questions.

Incidentally, but not coincidentally, one hundred years ago today, on the 11th  of November, 1918, the Armistice of Compiègne was signed, formally ending the First World War. The event is commemorated each November 11 as Armistice Day or Remembrance Day.

Continue to Part 2 of the Cary Burkett interview.