« Neither of us had seen a ghost, but I knew what he meant. »

I had planned to feature quite another tale this week, but seeing as we are in the torrid grip of quite the heat wave, I opted in the end for something more topical I’d been saving on the back burner.

Edward Nelson Bridwell (1931–1987) is one of those scarcely-noticed but greatly accomplished figures of American comics. At DC from the mid-1960s to the end of his life, he edited, wrote, packaged and compiled his heart out. Most impressive, in my view, were his erudition and discerning eye for a fine short story.

There’s always a blessed but mostly-powerless minority of comics creators that endeavours to improve the unwashed readership’s minds… nearly never at Marvel, most often at DC. In the mid-1970s, while working as Joe Orlando‘s editorial assistant, Bridwell adapted three excellent, but highly unconventional vintage spooky tales, as far afield as imaginable from the usual EC-by-homeopathy fare his boss favoured. These were William Fryer Harvey‘s August Heat (Secrets of Sinister House no. 12, July 1973), Ambrose Bierce‘s The Man and the Snake (Secrets of Sinister House 14, October 1973) and John Russell’s The Price of the Head (Weird Mystery Tales no. 14, Oct.-Nov. 1974); all three were splendidly brought to visual glory by WOT favourite Alfredo Alcala (1925-2000). All three are moody slow burners, with much introspection and little action.

On this scorching day (currently a sticky 35°F /95°F in Montréal, Canada) you’ll forgive me for not waiting until August to share this dark beauty with you. 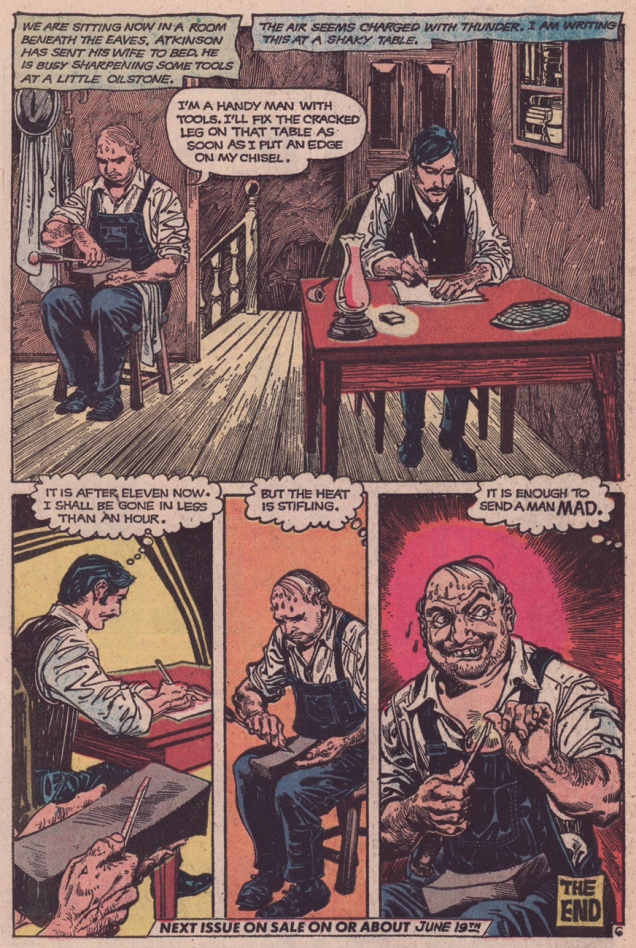 As evidence of Mr. Bridwell’s skill as an adapter, feel free to read the full (yet quite brief) text of August Heat. Or listen to one its several fine radio adaptations, the choice is yours:

The 1945 version on Suspense, starring Ronald Colman (presented by the Roma Wine Company of Fresno, California). Suspense’s 1948 remake or the 1956 Sleep No More adaptation, recited by Nelson Olmsted.

Oh, and in case you’re curious, here’s a peek at the picturesque English resort of Clacton-on-Sea: