« What’s that noise comin’ up from the cellar?
It’s the restless bones of Boris and Bela* »

It’s a cinch that William Henry Pratt, back when he was eking out a living in Canada, digging ditches or driving a truck, never suspected that his name, his stage name that is, would still elicit shivers of recognition long after his passing. Here we are, a whole hundred and thirty years past his birth, in Camberwell, South London, on Wednesday, November 23, 1887.

From his ascent to stardom in the early 1930s until his passing in 1969, he certainly lived to see his likeness appear in a bewildering array of toys and games and bedsheets and mugs and a zillion knicknacks and gewgaws, a parade that continues to this day. But he was likely never represented more consistently and abundantly than he was in comic books. 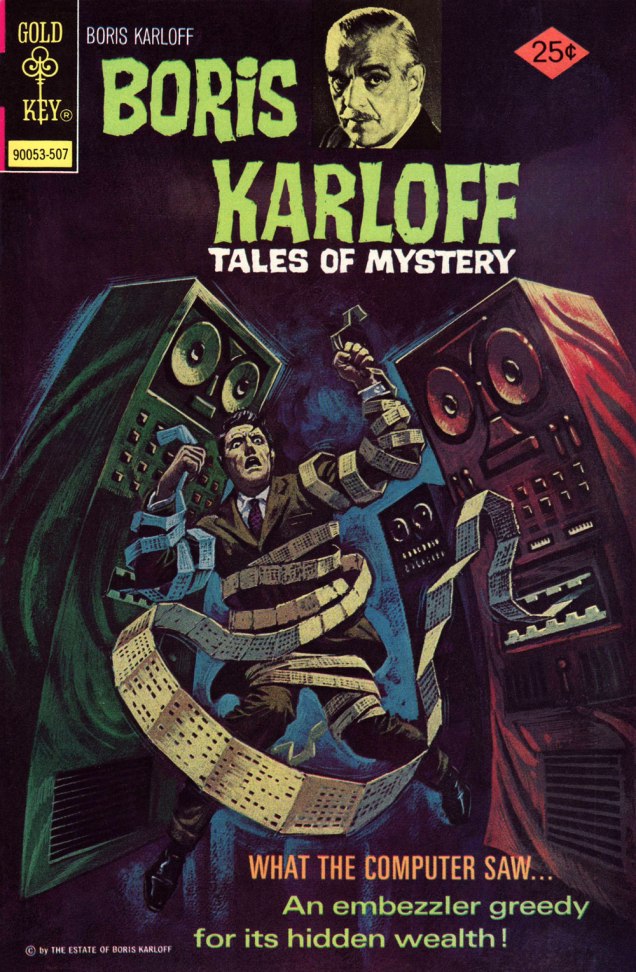 « These computer cards are wonderful… almost as if they were alive! They tell me everything! » Boris Karloff Tales of Mystery no. 62 (July 1973). Luis Angel Dominguez‘s painted cover depicts a scene from Arnold Drake‘s witty It’s in the Cards.

And remember, there’s far more to Boris Karloff than Frankenstein’s Monster: for evidence of his talent, check out The Body Snatcher (1945, directed by Robert Wise and produced by Val Lewton) or Targets (1968, directed by Peter Bogdanovich.)

Let’s reserve our closing words for the man (monster) himself: « Certainly I was typed. But what is typing? It is a trademark, a means by which the public recognizes you. Actors work all their lives to achieve that. I got mine with just one picture. It was a blessing. »

7 thoughts on “On This Day: Boris Karloff Crosses Over”